A Grade I Listed Building in Nercwys, Flintshire 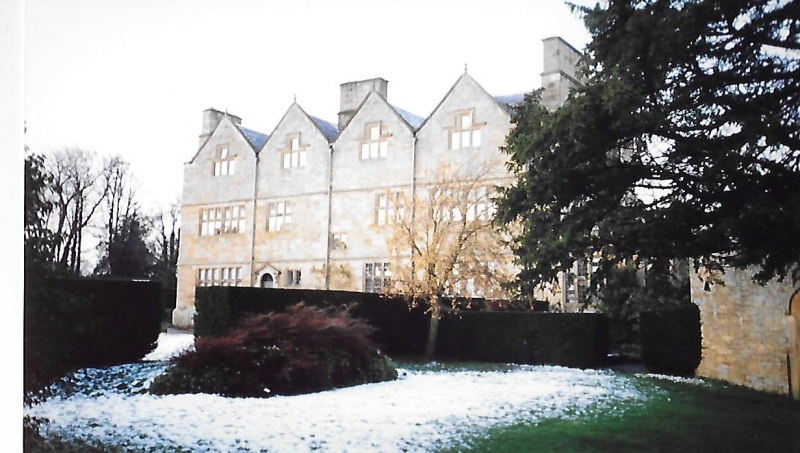 Location: To the E of a subsidiary road leading from Mold to Treuddyn, approached via a tree-lined drive and facing a large forecourt.

Gentry house built for John Wynne of Mod, Gent. A building contract, dated 1637, survives for the masonry and glazing. The contract names Evan Jones, carpenter, as having drawn the plan and the contracting mason as Raffe Booth of Chester. It specifies that the work was to be completed by 20 July 1638, according with a date plaque on the exterior. An internal date of 1640 in the plaster work above the fireplace in the great chamber (ex info Mr Furse, the owner) suggests that the house was not completed until 1640 at the earliest. Internal refurbishment of the 2nd quarter of the C18. In 1797 the house was enlarged and altered for John Giffard of Chillington, Staffs. and his wife, Elizabeth Hyde of Nerquis, with 2 wings with wide storied bow windows added to the E and W sides of the house. alterations of the early C19 in a Gothick style, some rainwater goods dated 1817, others in the 1820s. In the mid 1960s the house was restored and consolidated and the 1797 wings were largely demolished (ground floor of E wing survives, separately listed with service courtyard gateway and screen walls).

The surviving house is constructed of brick faced up in fine sandstone ashlar; slate roof with lead valleys. It has been suggested that the ashlar facing is secondary, but R B Heaton. OBE, FRIBA, who worked on the building in the 1960s, reports that the inner skin of brick and outer skin of masonry appeared to be contemporary when seen in section.

A photograph of an 1821 painting of the house by Moses Griffiths is in the possession of the owner. The original is in the N Wales museum at Bodelwyddan Castle.

The house is unique in North Wales for the survival of the building contract. Peter Smith notes that the plan by Evan Jones might have been copied from one by a professional surveyor or architect. Jones was to supervise the work, the guarantee of standards covered by a 'clause to the effect that it is to be of the same standards as a building recently erected nearby, a clause that does much to explain the persistence of regional character' (Smith, 334).

Fragments of the Gothick porch were relocated to Portmeirion, Gwynedd in the 1960s.

Asymmetrical rear (S) elevation. 4 gables with 4-light stepped windows. Paired 6-light windows to first floor outer bays with similar adjacent single windows to ground floor outer bays. To the L (second bay), a late C18 garden door with open-pedimented stone entablature with scrolled brackets. Arched doorway with contemporary recessed 6-panel door and plain 3-light fan. Raised access via 4 splayed steps (modern replacements) with contemporary wrought iron decorative railings with scrolled foliate balusters and ball and urn finials. Next to this two 2-light stair windows. To the R on the ground floor a further 6-light window. The moulded plinth is stepped down at this point. To the L of the garden entrance, a Tudor-arched cellar entrance with stepped access and a 3-light central window, outer lights blind. Further 2-light cellar window to the R of the garden door (one light blocked).

Internal porch with Gothick inner doors, recycled from an early C19 glazed screen probably contemporary with the porch and removed in the 1960s (ex info Mr Heaton). Grained timber with intersecting tracery above panels with blind quatrefoils. L-shaped hall with N facing bay at the dais end. 3 chamfered stopped cross-beams. Early C19 geometric floor. Large fireplace from the Gothick phase with 4-centred arch and blind traceried spandrels, pilasters and frieze, the latter with heraldic shields. 12 painted heraldic quarries (repaired), formerly in the Gothick porch, are resited in the hall windows. At the dais end, 3 Jacobean double ovolo-moulded door cases with scroll stops. That leading to the stair, R of the fireplace, is original, the 2 parlour ones are C19 copies. The door cases have carved brackets and pendentives to arched heads with raised geometric ornaments to the spandrels and small, plain bosses to the voussoirs. Original boarded door to stairwell with applied pilasters, brackets and pendentives; contemporary ironwork. Similar doors to the 2 parlour entrances.

The NW parlour has a fine interior of the c1725-1750 - the Greek key pattern may be later. Large field panelling with shouldered surrounds above an alternately advanced and recessed dado with moulded rail and plinth; similar cornice. The reverse of the entrance door is 6-panelled, raised and fielded; matching blind door to the N. Black marble chimney-piece with depressed arched head, scrolled brackets and fluted key. Classical landscape above in a part-gilded, shouldered egg-and-dart moulded frame with scrolled pediment with urn and foliate swags. There is an applied key pattern around the picture. Flanking the fireplace 2 fine shell niches, shouldered with fluted and gilded pilasters and scrolled keys. The upper niches are heavily gadrooned. 2 tiers of edge-gilt shaped shelves. Contemporary pelmet over window with scrolled pediment and key pattern. The key pattern also appears on 2 boxed ceiling beams.

The SW parlour, with a slightly higher ceiling that the NW, has a 3-bay geometric plaster ceiling with interlocking squares and octagons enriched with floral sprigs in the Tudor manner. Tudor style fireplace, rebuilt in the C20.

Both NW and SW parlours have fine secret-nailed oak floors.

2 further contemporary doorcases at the service end of the hall, details as before. That to L of the fireplace has a contemporary door (formerly 2-part), originally serving the buttery. Contemporary door and doorcase to cellar. 2-phase cellar, partly brick-vaulted, includes a water system of piped spring water into a stone cistern, the water exits under the floor to feed the duck pond in the poultry court. At the E (service) end of the hall an entrance as before leading to a service passage with kitchen and pantry off, the (blocked) entrance to the former having a contemporary moulded and carved doorcase with ogival head terminating in a carved trefoil. White marble chimney-piece, recycled from upstairs, with timber lugged and carved surround and frieze as before and 3-tiered cornice.

Plain main stair to first floor of c1725-1750. Single flight with plain newels, panelled sides and pilasters in grained pine. Great chamber above hall originally C-shaped, the removal of a closet partition gives it a reversed J plan. C18 raised and fielded panelling with moulded dado rail. The cornice is contemporary with the removal of the closet partition. Chimney-piece and doors as before in the NW parlour. Additional Rococo chimney-pieces in the rooms off, that in the SW room the finest, and all with later classical iron grates.

Contemporary Tudor-arched stone fireplace to 2nd floor gallery with ovolo-moulded jambs and replaced lintel; similar chimney-pieces to the outer rooms on the S side.

A highly important house with a C17 core and fine C18 interiors.