A Grade I Listed Building in Blaenavon, Torfaen 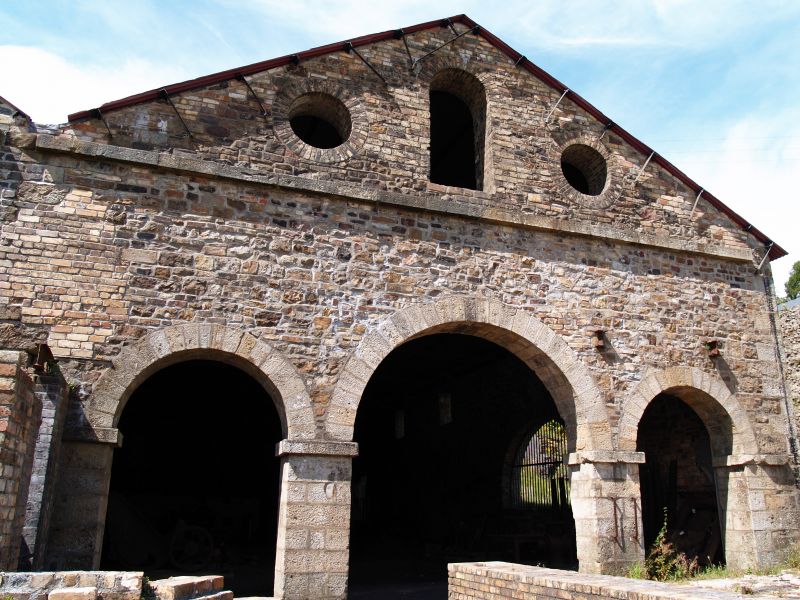 Location: Situated on the north-western side of the site.

A drawing of 1798 by Sir Richard Coalt Hoare shows a casting house in front of each of the three early furnaces at Blaenavon. They probably date from the erection of the furnaces in 1789. The cast house to furnace No 1 survives together with an adjacent 'Foundry'. This latter building occupies the site of the first engine house (demolished in 1860) and was certainly in place by the date of survey of the 1880 Ordnance Survey map.

A pair of single storey, rectangular buildings whose gable end facades are of stone rubble masonry, with brick patching. There are ashlar dressings to quoins and ground floor openings and a stone band course giving pediment treatment; brick dressings to upper level openings. There are the remains of other cast houses to either side.

Cast house:- The main facade has three semi-circular arched ground floor openings springing from square piers. Of the three upper openings, the larger central one has a semi-circular arch and the outer two are ocular windows. The pitched roof is of slate. The base of a cupola furnace stands at the east corner of the building.

Foundry:- At ground level the main facade has three openings with evidence of other blocked openings. The larger central elliptical arch is flanked by a semi-circular arched opening to the south and a rectangular opening to the north. The roof is missing. A cupola furnace and enclosure stand at the east corner of the building.

Included at grade I as part of this internationally important early coke-fired blast furnace complex.

Group value with other listed items at Blaenavon Ironworks.