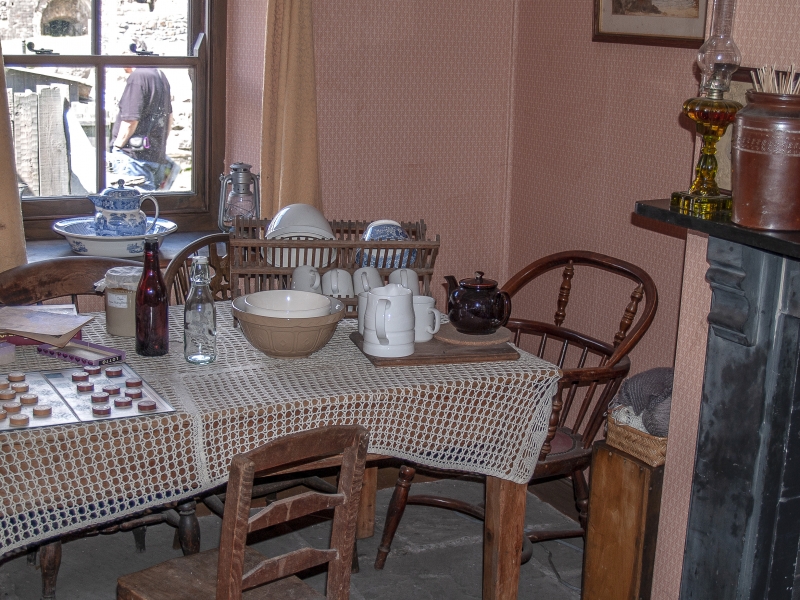 Location: Situated to the east side of the site.

Built between 1789 and 1792, these buildings housed key workers, the company store, the counting house and possibly the manager's house, all relating to the ironworks. The design of its door and window heads are characteristic of the industrial West Midlands. It is a very rare example of the first phase of Welsh industrial workers' housing, extensive recent restoration.

Buildings form three sides of a square around the ruined base of the 1860 engine house chimney stack. The south range is called Engine Row. Construction is of rubble stone outer walls, with red brick door and window heads. Windows have stone sills and iron frames. North and south ranges restored in original style. East range currently undergoing reconstruction.
The north range and Engine Row each comprise a terrace of four houses; the east range had five houses and the company shop. Frontages of the north and south ranges have a centrally positioned stable door, two windows to the ground floor and two to the first floor. East range houses are narrower with a single window to each floor. At the south corner, the company shop, has three storeys. The south gable has a door and a single window to each floor. The pitched roofs are of slate. Brick chimney stacks in the house partitions. Two cat slide extensions to rear of Engine Row.

The houses are arranged in pairs, with fireplace and chimney in the end walls. Partitions of oak framing and brick. Each house had a conventional plan with two rooms to each floor and a larder on the ground floor. The corner staircase gives access to two bedrooms on the first floor. In Engine Row, the layout of the two western houses has been reconstructed. The house nearest the ironworks yard incorporates a small bread oven in the corner of the fireplace. The two eastern houses hold a Museum display.

Listed for its special interest as early industrial housing.

Group value with other listed items at Blaenavon Ironworks.