A Grade I Listed Building in Llanwddyn, Powys 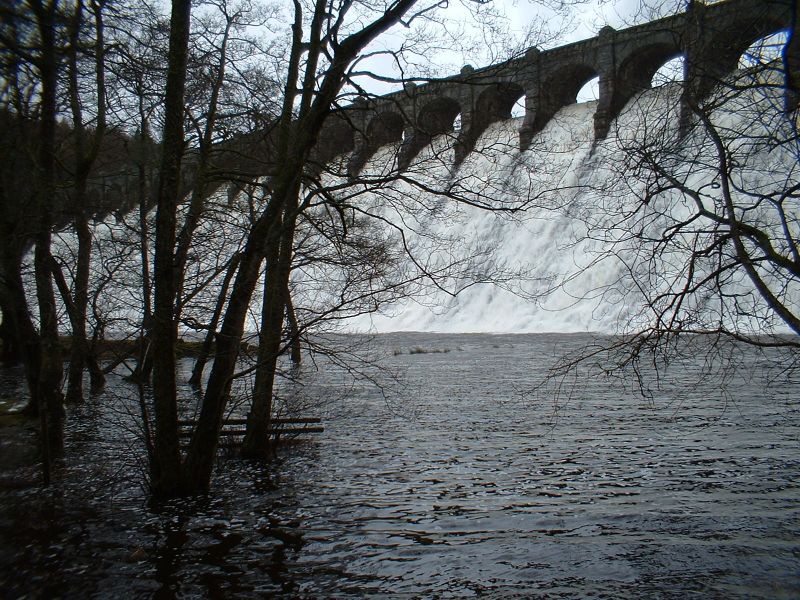 Location: In the Vyrnwy Valley, at the south-east end of this magnificent reservoir.

The Vyrnwy Dam was built between 1881 and 1890 and was the first large masonry dam in Britain. It pioneered methods of construction which were deemed to have exceeded by far the safety standards of earlier dams, and has been described by Rolt as undoubtedly one of the most notable monuments to late-Victorian civil engineering. The reservoir created was the largest in Europe at the time of its completion and provided water to the city of Liverpool via an aqueduct 110 km in length; it was opened in 1892. This was the first of several long-distance water supply schemes in Britain which were vital to urban development in the late Victorian period. The whole scheme, including the dam, was designed by the engineers George Frederick Deacon and Thomas Hawksley; Hawksley was engineer in chief until his retirement in 1885 when Deacon, the Liverpool Waterworks engineer, succeeded him, although effectively he had been in charge from the start.

Large masonry dam of the gravity type, 358m long and 44m high and topped by a spectacular carriageway of 31 masonry arches, each of 7.3m span. It was designed with an exceptional width of 39m at its base to ensure stability and was constructed of massive, irregularly shaped, blocks of stone which were locally quarried; mostly a variety of rubble but with much freestone facing and some vermiculated dressings, especially to the towers. Built in a neo-Baroque manner, in the deliberately massive style characteristic of the work of Sir John Vanburgh. Symmetrical design with clustered groups of four towers at either end of the nineteen-arch central section which comprised the principal overflow; full-length pierced parapet and piers flanking each arch. Each tower is capped by a corbelled pyramidal stone roof and has pierced upper stage over a pronounced bracket cornice; the main piers of the towers are rusticated to give a ribbed appearance and the doorways to the towers are tapered in Egyptian manner; on the south-east sides the towers have heavily key-blocked round-arched openings with pierced and bracketed balustrades. The dam has two inscriptions to the frieze on this side, reading: OPUS INCHOATUM MDCCCLXXX and OPUS ABSOLUTUM MDCCCXC.

In the rock face to the north of the dam (separately listed) are three commemorative plaques, the middle one, on the axis of the dam road, recording the laying of the foundation stone in 1881 by Lord Powis.

At the base of the dam, below the towers, there are two transverse discharge tunnels with valves operated hydraulically from a chamber near water level. Cast-iron valve controls were made by Guest and Chrimes of Rotherham. Tunnels and cast-iron staircases within tapering circular shafts provide access throughout the dam from the towers. A network of drainage tunnels was incorporated for safety purposes to prevent build up of water pressure underneath the base, and this was apparently the first dam to be constructed featuring such equipment.

Listed Grade I for its national importance as an outstanding achievement of Victorian water engineering and as one of the most impressive examples of industrial architecture in Wales.