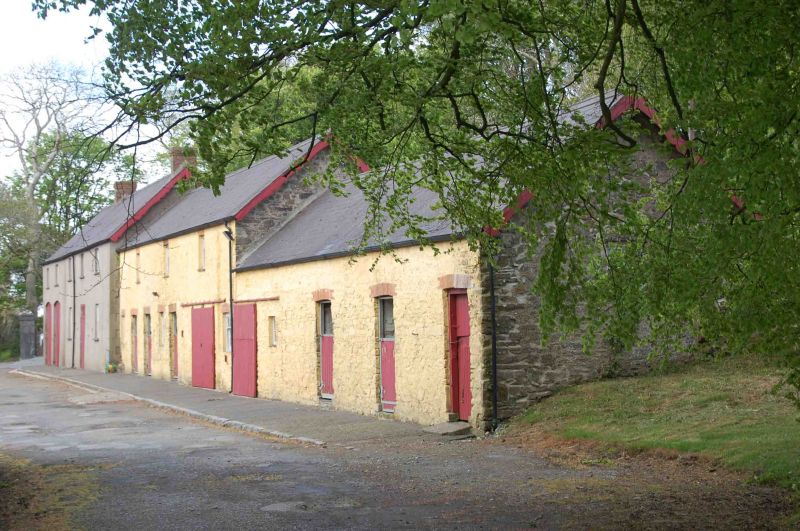 Entry Name: Coach-house and Stable Range to E side of Stable Courtyard at Cresselly House

Location: The Stable courtyard is immediately to the S of Cresselly House. This range is on its E side, parallel to the main road with cobbled pavement to front.

This range originated with the building of Cresselly House c.1770 for John Bartlett Allen. Enlarged in C19 before 1864, probably in two phases.

Mostly 2-storey rubble service range comprising coach-house and carpenter's workshop at N end and stables and granary to S end. The building is in three sections, stepping down towards S end; all have slate roofs and wave-pattern bargeboards. The taller 6-window northern block is cement-rendered with false quoins. It has 6-pane sash windows to first floor and 12-pane sash windows to ground floor flanking the large boarded door entrances to coach-house and stables; the former has segmental-headed gates and the latter has 4-pane overlight; brick chimney stacks. Set back and stepped down to right is a long three-window range with colourwashed rubble front. It has camber-headed brick red voussoirs to windows and doors including small-pane sashes and split boarded stable doors; sliding door to right. Stepped down to S end is a 4-bay single-storey range, also with colourwashed front and with boarded stable doors. S gable end has the outline of a gable to a now lost further range at this end.