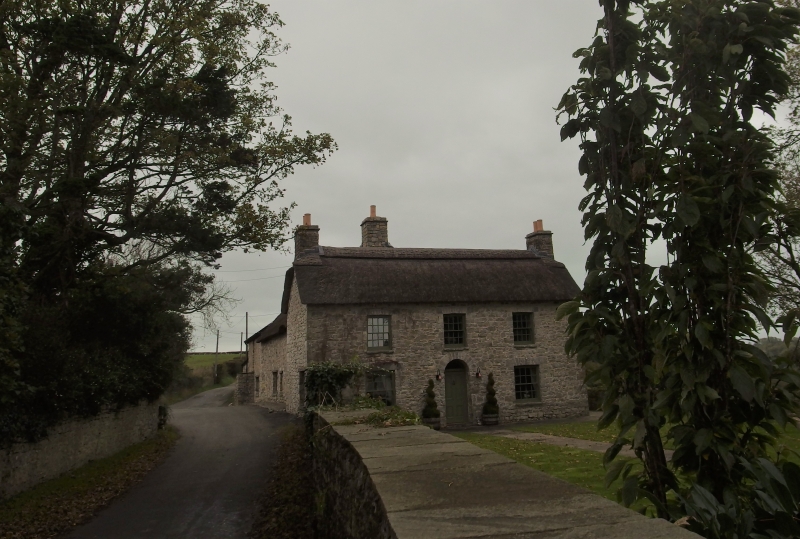 Location: Located S of Llancarfan village, on the N side of the Llancadle-Penmark Road.

Two storey central cell of two unit direct entry plan. Colourwashed elevations with thatched roof with decorative ridge. Two gable end stacks. Three randomly placed modern casements to ground floor, in original openings with one two-light casement to first floor under eyebrow. The N end is a one and a half storey granary range with slated roof, limestone rubble elevations, modern five-light timber window to ground and flight of stone steps leading up to granary door, now with modern leaded window. Gable end stack is of brick with concrete roof tiles. To the S end of the central cell is an early C19 two storey range, set at right angles to it. W gable is slate hung, with rubble stack. Symmetrical main front to S is exposed rubble and has three 16 panes sashes with horns to first and two to ground, flanking central four panelled door with semi-circular fanlight over.

Central hall is accessed on E elevation. Open fire with timber bressumer with bake oven to W jamb and cross corner stone stair to E of fire. Three exposed beams with medium chamfers and ogee stops. The second bay on the S side has open fire with oven on S jamb and gable entry stone stair to S side. The C19 wing to S end opens into central hallway with flanking rooms to E and W.