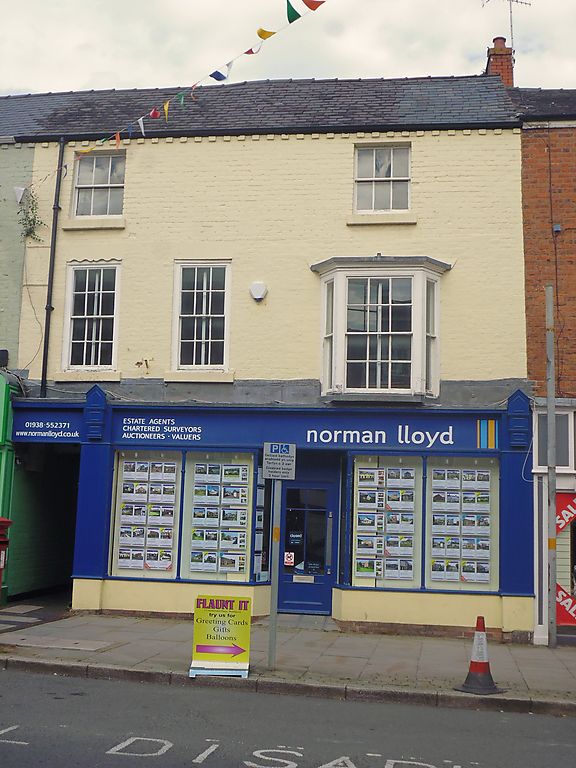 Location: In the upper section of Broad Street, the property is bisected by the entrance to Boot Street

Comprises a single development (originally forming 2 houses, and also including the neighbouring No 3), dated on a plaque 1721 with initials N over W S (referring to it's builders, William and Sarah Newill). The facade detail appears to be mainly C19: some early C19 detail with later alterations (including substantial late C19 re-ordering at No 4). The rear wing, however, remains as part of the original early C18 building.

Painted brick with slate roof. 3 storeys, the 2 properties are divided on the ground floor by a through passage (Boot Street). No 4 is a single window range, with C20 shop front to ground floor (a continuation to that in No 3); canted oriel window with tripartite sashes to first floor (a late C19 insertion), and low 6-pane sash window above, apparently inserted when the roof was raised in the late C19. No 5 is a 3-window range with 2x12-pane sashes with flat arched heads to the left, and a canted oriel to the right, also with 12-pane sash window. 2x6-pane sash windows in second storey. Dentilled eaves band across the whole property. To the rear, No 4 has short rubble and brick rear wing forming part of the original building, with tall stair-window towards the angle. No 5 also has short rear wing as part of the original building, with doorway (a 6-panelled door with high overlight) towards the angle. Set back beyond is a later range, probably added in the early C19: this comprises a 3-storeyed, 4-window range, with outer doorways, and 12-pane sashes (5 windows between the doorways on the ground floor), and 6-pane sashes below the eaves on the upper storey.

Although the ground floors of both buildings have been extensively altered, both retain part of the original early C18 turned-baluster staircases in the rear wings.

Although the main frontage of the buildings have been successively altered in the C19 and C20, they retain the external layout and much of the fabric of a pair of early C18 town houses, with some surviving original detail, especially to the rear. The long C19 wing at the back of No 5 is also of interest as it represents a typical example of burgage development.