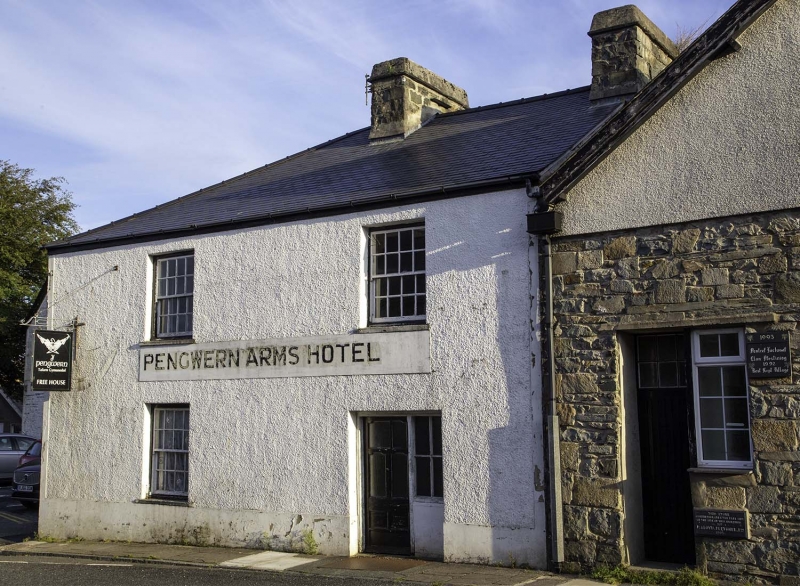 Location: Facing the square prominently to the N.

Dated 1728 and apparently always an inn; altered and extended in the early C19 and again in the third-quarter C19. Originally in the possession of the Lewis family of nearby Pengwern Hall.

Large inn complex of three main ranges arranged as an L; chiefly of 2 stories. Of whitened and partly stuccoed rubble with slate roofs and plain, broad chimneys. The earliest section is the stuccoed central block. This is of two bays with large, early C19 16-pane sashes to both floors. In the centre is a fine recessed slate armorial plaque with the arms of the Lewis family and the inscribed date 1728. Adjoining this block to the R and at right-angles with it, an early C19 stuccoed block with hipped roof. Its entrance front faces W and is of 3 bays. Central entrance with modern boarded door and a plain rectangular fan. Flanking original 16-pane sash windows with 3 similar windows above. 2-window pebble-dashed S face with entrance to the R and windows as before.

To the L of the primary block, a third-quarter C19 2-storey, 3-bay range of whitened, snecked rubble; stone chimney to R with pronounced moulded capping. Recessed central entrance bay with modern glazed door and glazed inner porch. Above, a 20-pane contemporary recessed sash window, its outer panes narrower than the rest. The flanking bays are advanced and gabled, that to the L the wider. Plain bargeboards with simple wooden pendentives. Further, similar windows to ground and first floors and simple 4-pane sashes to the attics. Plain, broad stucco string course between the principal floors. In front of the central entrance bay, and extending into the flanking bays, a modern out-of-character porch, part-glazed and with hipped roof. Large projecting storeyed rear range with fenestration as before and full-height canted bay with hipped roof to gable end.

An C18/C19 inn retaining much of its external character in a prominent position within the village centre. Group value.