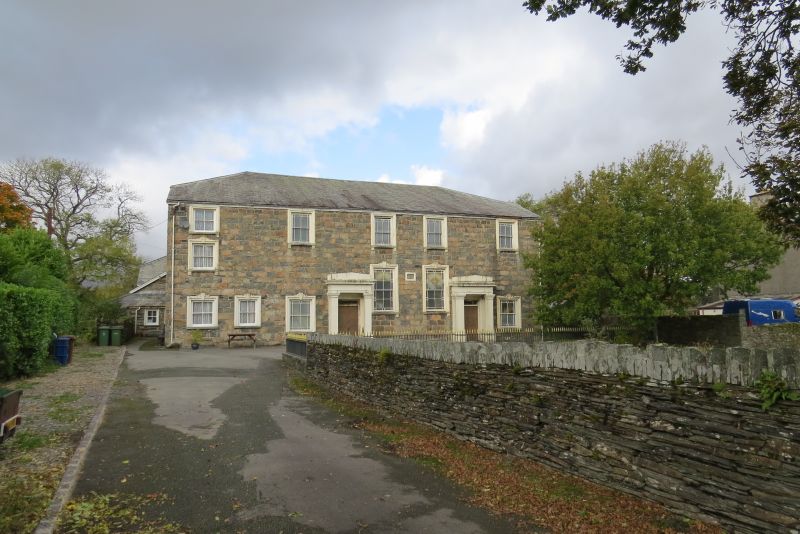 Location: Located approximately 91m NW of the A 470 in the centre of the village; set back behind contemporary decorative railings on a slightly raised, part-metalled terrace and accessed from the road via a sh

Of coursed, rough-dressed rubble with half-hipped slate roof; resembling a storied terrace block, the chapel section of which is symmetrical. This has two entrances with late C19 Tuscan stone porches with simple pillars, pilasters and entablatures; 6-panel double doors with rectangular fanlights; 2 windows between to both ground and gallery levels. The outer windows light the two gallery stairs; the inner ones light the chapel itself and the gallery above. All the windows have heavily-moulded late C19 stucco architraves with scrolled brackets to projecting slate cills. Plain, projecting keystones to those at ground floor supported by scrolled brackets. The glazing is of late C19 sash type of 4 and 8 panes with marginal glazing, decorative enamelled glass to the latter. Between the larger chapel windows a recessed slate plaque with inscribed dedication and date 1839.

The minister's house, occupying the L of the block, is on three floors and two bays. Windows as before, though smaller and with plain sash glazing; single to upper floors and twin to ground floor. The entrance is on the L gable end; late C19 4-panelled door with shouldered-arched glazed upper panels. Further 4-pane sashes to the L of this. Both gable ends and rear are slate-hung. The latter has windows with marginal glazing as before, though one original (1839) small-paned sash survives on the top storey of the minister's house section.

The interior was not accessible at the time of inspection (June 1995).