A Grade I Listed Building in Cefn-mawr, Wrexham 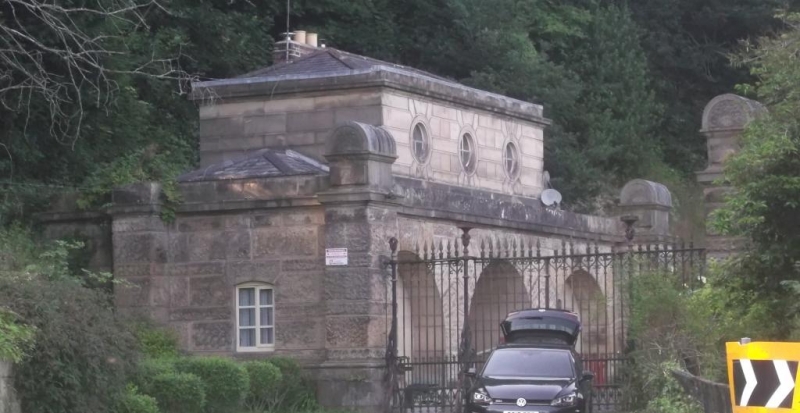 Location: South-western entrance to the Park, on the W bank of the Dee immediately NW of New Bridge over the river.

The lodge was built 1827-8 by C.R.Cockerell, for Sir Watkin Williams-Wynn, the fifth Baronet of Wynnstay. Sir Watkin commissioned a programme of work on the house itself (to which Cockerell also contributed), as well as improvements to the park, but it has been suggested that this lodge was designed as early as 1821 for a royal visit which then never took place.

The lodge is set on the inside of the gates, built against the steeply sloping bank. With the gates and their associated railings it forms a powerful, integrated composition. The lodge has a rusticated lower storey comprising 3 arcaded bays with heavy cornice and blocking course, terminated by massive rusticated pilasters with half-round caps, which are aligned with corresponding piers punctuating the railings opposite which run back from the gates above the river bank. Rear angles of the lodge are also marked by pilasters, but without caps. The outer arches contain windows, with panelled doorway in deeply recessed segmentally vaulted central arch. Recessed hipped roofs flank the stepped-back upper storey, which is built over the central section only. It is of channelled ashlar with scrolled volutes at the outer angles, 3 circular windows, cornice and blocking course, and hipped slate roof. Chimney concealed against its rear wall. The S gable of the lodge forms part of the flanking wall for the gates, and the SE pilaster of the lodge forms one of the terminal piers for the gates. The gates are paired with flanking side gate and screen, cast-iron spear-head railings with scrolled and gilded decoration. A length of simpler railing lines the river-side of the approach to the gates; those the far side of the gates, parallel to the lodge, are more ornamental and run between stone pilasters.

An outstanding example of Neo-Classical design owing a strong debt to Ledoux and French neo-classical architecture: forcefully composed and dramatically detailed, the lodge with its associated gates and railings form a highly imaginative and expressive entrance to the park. One of the finest lodge designs of its period in Britain.