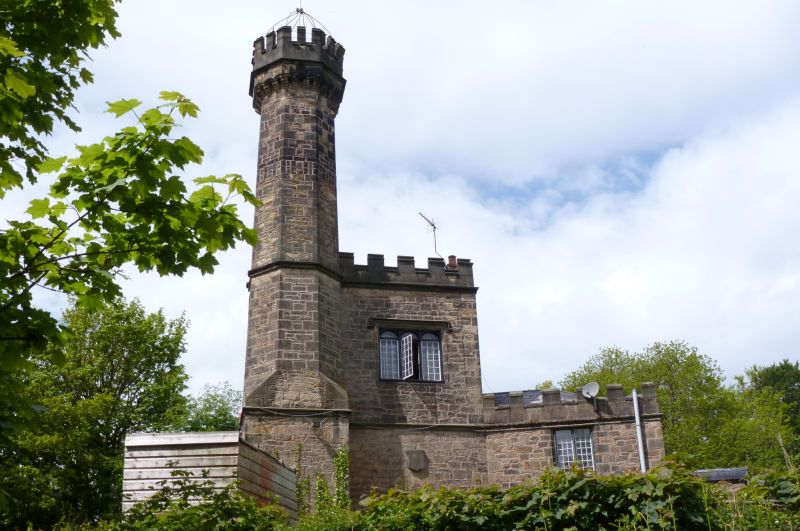 Location: The tower is on a rocky eminence at the SW corner of Wynnstay Park, and approached via a track which leaves Park Road opposite Short Lane.

Sir Watkin Williams-Wynn, Fifth Baronet of Wynnstay undertook a series of improvements in the park at Wynnstay in the early C19. As part of this programme, the tower was built c1815-20 to commemorate the battle of Waterloo. It was designed as a viewing point and lodge serving a drive (now lost) cut through rock immediately W of the tower. It is probably the work of Benjamin Gummow, architect, of Wrexham.

Asymmetrically composed for picturesque effect, comprising accommodation in 2 blocks, the tower itself at the outer (SE) angle of the main block, with flanking outworks to N and S. Random rubble with freestone dressings. Tower has square base with plinth, and slender tapering octagonal upper stages, over a moulded string course which continues the line of the cornice of the accommodation blocks. Scallop moulding to machicolated and embattled parapet. Narrow doorway in re-entrant angle with main accommodation block, and 'arrow-loop' windows in S elevation. Main accommodation block is 3-storeyed (1st floor lit only from the S side), with small-paned cast-iron windows with drop-ended hood moulds. First floor emphasised by a larger, 3-light window which has segmentally arched lights. Similar window to ground floor of lower block canted out slightly to the right: this has small 2-light window to first floor, inserted or renewed doorway in its N return elevation, with simpler small-paned iron windows of 2 and 4-lights alongside. Both blocks have embattled parapets above moulded cornice.

Outwork walls flank the tower to N and S: random rubble with free-stone embattling. The S length incorporates a 'mock turret' canted out from the line of the wall.

The interior retains some original decorative work, notably a fine lierne-vaulted ceiling in the upper room of the main block.

Listed as a striking feature of the park at Wynnstay - a good example of the use of the gothic style for picturesque effect to suggest and enhance the sublime qualities of its rocky site.