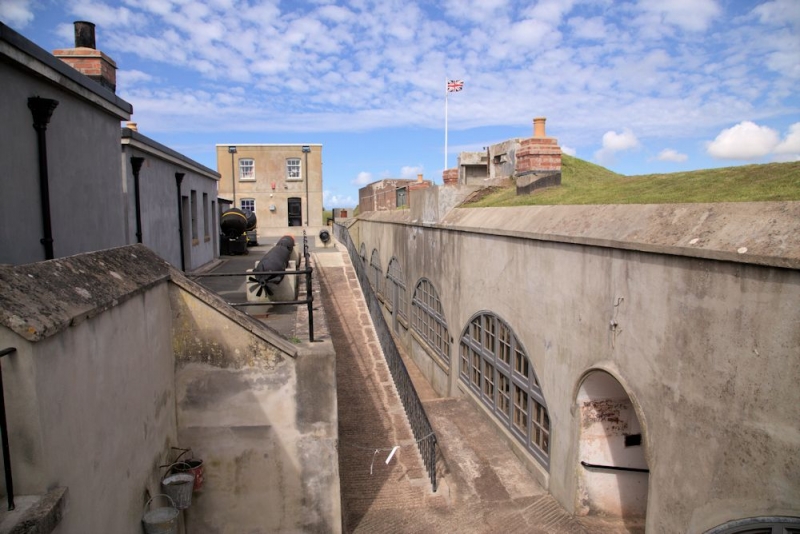 Location: At N of Angle, overlooking Milford Haven, and reached by a lane at W of village.

Chapel Bay Battery and its associated structures occupy the whole of Chapel Bay from the fort itself (which is the scheduled Ancient Monument) as far as the next headland to the E, a distance of approximately 1/2 km. Land for defensive works here was first acquired in c.1812, and the first works date from the Act of 1858. The fort itself is c.1890.

Chapel Bay Fort: Three gun emplacements facing N towards the Haven date from 1903, and were for 6" BL guns. A single emplacement facing W is the only survivor from the original battery of c.1890, for 10" RML guns. [One of the guns survives and is now displayed at West Angle Bay.] Concrete parapets with forward sloping aprons merging with the ground. Detonator stores beneath guns, doors missing. Shell hoist mechanisms survive. Access to N emplacements is by concrete stairs from a sunken communicating passage at rear.
At rear of communicating passage is a sunken barracks unit, consisting of eight segmentally brick-vaulted rooms each approx. 5 m by 6 m, with connecting doors in line. In seven of the barracks there are hammock hooks along two sides at approx. 40 cm apart. No hooks in the last one to the E, which was evidently intended for officers. All barracks were heated by fireplaces (now blocked up) back-to-back in alternate cross walls with short brick chimneys. Door and window units were framed up to the soffit of the vaults, but all are missing.
On roof of this unit are the battery commander's station and a range- finding post.
One cross passage within this unit communicates front to rear. Another cross passage dips steeply down for access to lower levels. Behind the unit is another sunken passage with two ramps up to ground level at rear.
At ground level at rear are single-storey buildings: a workshop with generator and a smithy (skilling shed); a telephone room, master gunner's office and oil and paint store; RA workshop, ablution room and cookhouse. The latter building is an example of early construction in unreinforced concrete, protected by cement render, now damaged. The other buildings are in brickwork. Flat concrete roofs on rolled iron joists. At E of row: master gunners' quarters with porch. Latrines at rear. Nearer to bridge: latrines, machine gun shed, artillery store, lamp room, and coal store.
The fort is surrounded on three sides by a deep defensive ditch between concrete retaining walls, with two caponiers reached by tunnels from the interior of the fort.
Ancillary structures: In connection with Chapel Bay Fort are a number of structures essential to its understanding, on the land to the E of the fort as far as the next headland. At SM 8596 0363: a 12 pdr quick-firing battery of c.1880 and a minewatcher's post. At SM 8610 0355: well and pumphouse. At SM 8617 0351: a submarine mining establishment, consisting of engine room, generator room, store and test room, built in mass concrete. Also Maxim gun emplacements, light emplacements and a slipway.

Although consisting mainly of underground structures, this is listed for military historical interest as a complete C19 fort including important early buildings constructed in mass concrete.
Including Scheduled Ancient Monument No. Pe 333.