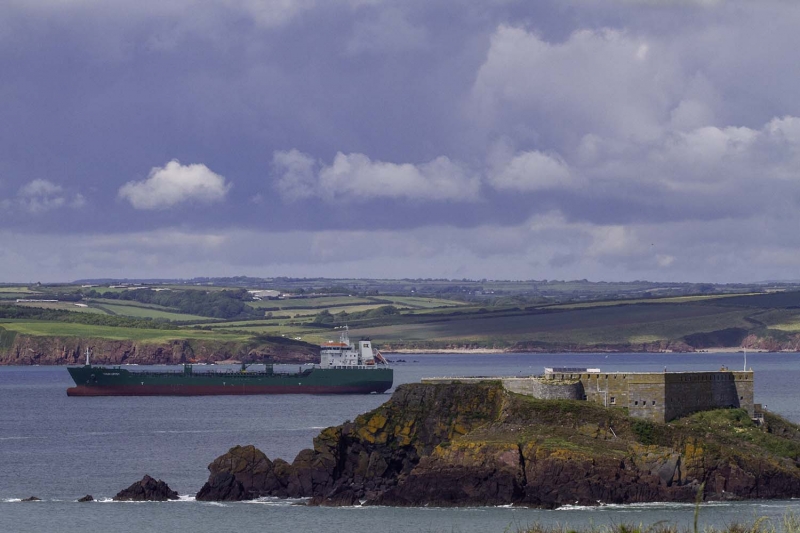 Commenced in 1852 and completed in 1854, Thorne Island fort was intended as an outer defence to Milford Haven in conjunction with Dale Point. It was designed for a garrison of 100 men. Its battery initially consisted of 9 ML guns. The fort was purchased at auction in 1932 for conversion to a hotel and after one change of ownership it it still a hotel.

The battery occupies the highest ground at the W, behind a low papapet. To the rear is a parade ground about 5 m below the level of the battery, surrounded to the N, E and S by vaulted single-storey barracks and ancillary buildings. Water reservoirs beneath the parade ground for 30,000 gallons. The N range consisted of a cookhouse and officers' quarters. The E range consisted of other ranks' barracks, but with the entrance to the fort and guardroom at the centre. The guardroom occupied a small bastion. More officers' quarters in the S range. At the W of the S range was an armoury, protected by a solid half-round bastion built out from the exterior wall. These barracks ranges have fine brickwork groin vaulting.
The barracks ranges are flat roofed with access to an E and S facing parapet with apertures for small arms fire. A bridge gives access over a gap between the S and E ranges.
Limestone ashlar masonry generally with emphasised quoins. Large shallow string course of squared section at base of parapet. [Exterior windows not original.] Entrance at E with voussoir-arch including projecting keystone. Lettering on the arch. Side pilaster at entrance, with simple cornice. Reinforced outer entrance doors approx. 12 cm thick, running on floor-track. Inner entrance doors missing, also ran on floor-track.
Hammer-faced ashlar to front of barracks ranges facing the parade ground. Large shallow squared cornice with quarter-round moulding beneath. Six-pane sash windows. Granite staircases up to battery.

Listed as a well-preserved fort of Palmerston's Haven defences.