Church of St Mary The Virgin 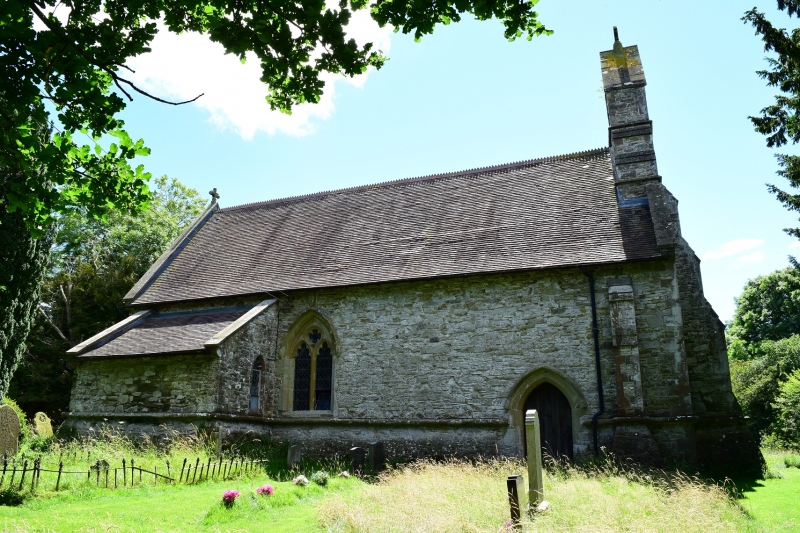 Location: In an isolated position just outside the hamlet of Snead, to the S of the main A 489, 5km from Churchstoke. The church occupies the centre of a small rectangular churchyard which is raised above the

The site is said to have been occupied by the founders of the Augustinian Priory of Chirbury (Shropshire). There is evidence for an earlier church within the fabric of the current church, particularly the S wall which may be C15. Church furniture also suggests a long history of occupation of the site. The church was rebuilt in 1870 by the Reverend Frederick Pardoe in memory of his wife, Emma. He died in 1892 and is buried in the Churchyard.

Small church in Geometric style consisting of nave and chancel in one, bellcote and vestry. Rubble masonry with red and yellow sandstone dressings and a tile roof. The 1870 fabric includes a battered plinth with string course above. There are two substantial diagonal buttresses at the W end each with three offsets which are likely to be contemporary. The geometric-style windows are generally of two cinquefoil-headed lancets with a quatrefoil above, under a hood mould. Some of the hood moulds have head stops, and it is likely that some of these are from the earlier church. Above one of the N windows is a larger carved head built into the masonry.

The S wall contains a doorway under a pointed arch, near the W end. Much of the fabric is likely to belong to the former church and includes two unusual features: in the centre is a corbelled sill supporting a few courses of masonry (and formerly a statue?). In the wall above this are two jamb stones and the line of a former window. There are some long projecting stones at the E end which may have formed a flying buttress.

Heavy collar truss roof with stencilled foliage decoration on plaster between rafters in chancel only. The nave is unplastered but was probably limewashed. Steps lead up to the chancel which has encaustic floor tiles, manufactured by or copied from the Maws Tileworks. There is a piscina to each side of the altar. The W window has stained glass in geometrical design. The other windows are plain with green margin glazing.

Furniture:There is an unusual font, said to date to the twelfth century. It has a rounded bowl with handles on opposite sides and spouts between them. It has been suggested that it was originally a stoup. The bowl stands on a Victorian base consisting of four shafts surmounted by carved heads and a two stage plinth. There is a screen with geometric tracery and an IHS monogram. The pulpit is similar and both probably date to 1870. There is a memorial to Thomas Pritchard, rector of the (former) church who died in 1717 aged 43.

Listed as a good example of a small, rustic, Victorian church, well proportioned and consistently detailed in a site of considerable historical importance.