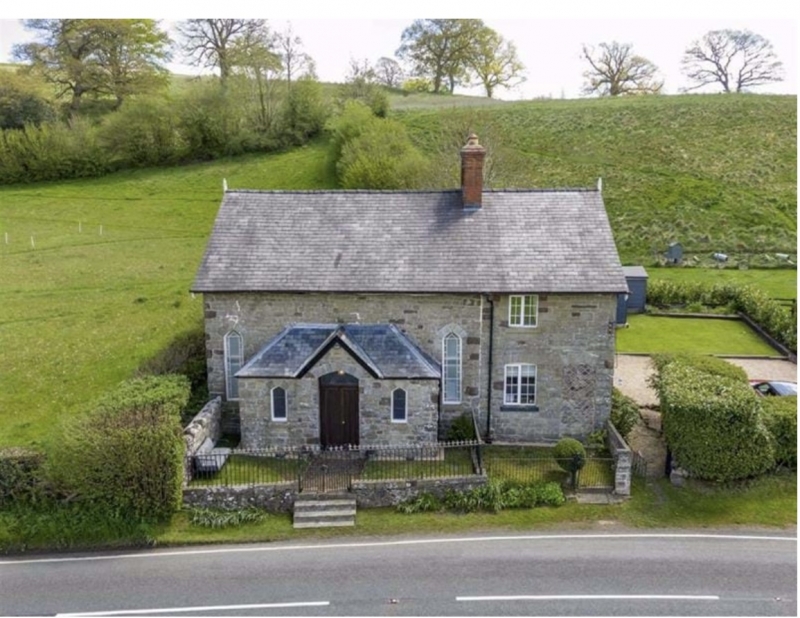 Location: Located alongside the main road to Meifod, 550m from Neuadd Bridge junction with the A458. The main entrance is approached directly from the road by a cobbled path, the forecourt is enclosed by cast

Built for the Calvinistic Methodists in 1834 at a cost of £200 to seat 135 and shown as Penybrin Chapel and House on the Tithe Map. The Welsh Presbyterian Church of Llanfair Caereinion had two daughter chapels, the Bethlehem Chapel at Dolgead and Capel Soar near Melin-y-grug. The original square building had a single door in the SW side approached by a path. This was altered in 1884 (date on porch gable), when the adjoining house was rebuilt, and two doors made in the front facing the road and covered by a long lean-to porch. There was also a stable for the minister's horse.

Single Chapel room with N porch and 2 storey, 2 bay house added at W end. Rock-faced local dark stone with a slate roof. The lean-to porch has a central gable over a boarded door, with side lancets. The main body of the chapel has two windows on each of 3 sides with margin glazed timber 'Y'-tracery, those to the front having flashed yellow glass and applied frosting. The caretaker's house is of one bay, with side door, and 2 rooms on each of 2 floors. Modern windows in original openings.

Seats c100 persons. Walls plastered up to a Gothic moulded frieze at the base of a coved ceiling, which has a central roundel. Cantilevered pulpit raised against an arched feature on the SE wall with moulded hood, and panelled sedd fawr below.

Listed as a good example of a small rural chapel with added minister's house.