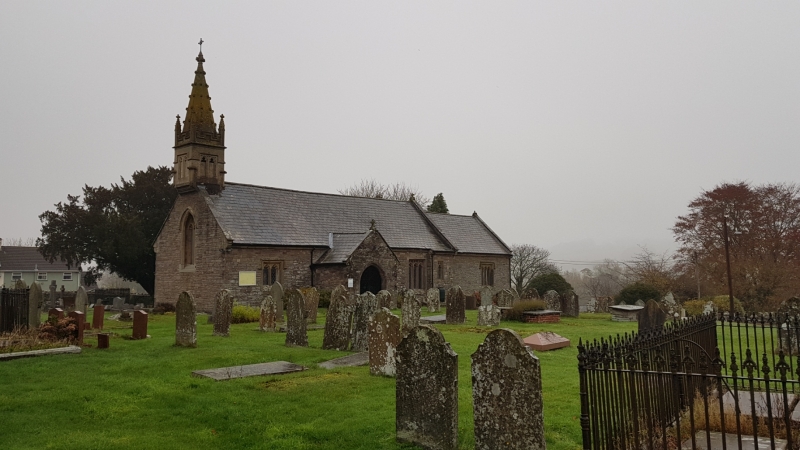 Location: Situated uphill from the village in a sloping churchyard with bier house to north-east corner.

Exterior: Gothic. Small local rubble church with slate roof consisting of aisless nave, stepped down and narrower chancel, south porch and north vestry. The most distinctive feature is the enormous square bellcote that oversails the eaves at west end with crenellated parapet and crocketed finials together with a fleuron ornamented spire with crucifix finial. The belfry below has 2-light belfry openings. The rest of the church has freestone gable parapets and eaves cornices. Perp 2 and 3-light windows with labels and cusping; single-light window to east end of nave on south side may have lit the rood. The porch has a moulded pointed arch entrance and a ribbed wagon ceiling with moulded cornices; cusped medieval window to east side and four-centred inner door with deep broach stops. The vestry doorway to north also has similar stops. 3-light east window and 2-light casement moulded west window.

Interior: Aisless nave has C16/C17 wagon ceiling with concave moulded oak cornice and roll-moulded ribs; the chancel roof is Victorian. Medieval chancel arch with dying inner order. Victorian furnishings including choir stalls, Gothic pulpit and font; the medieval font bowl is retained ex situ. Some good monuments are retained in the chancel including one dated 1604 with ornate Jacobean border and lettering and another dated 1788 to Giles Meredith and Cecily (lived at Glan Usk).

Listed for its special interest of the mid C19 restoration, an early work by John Prichard, and surviving earlier detail.