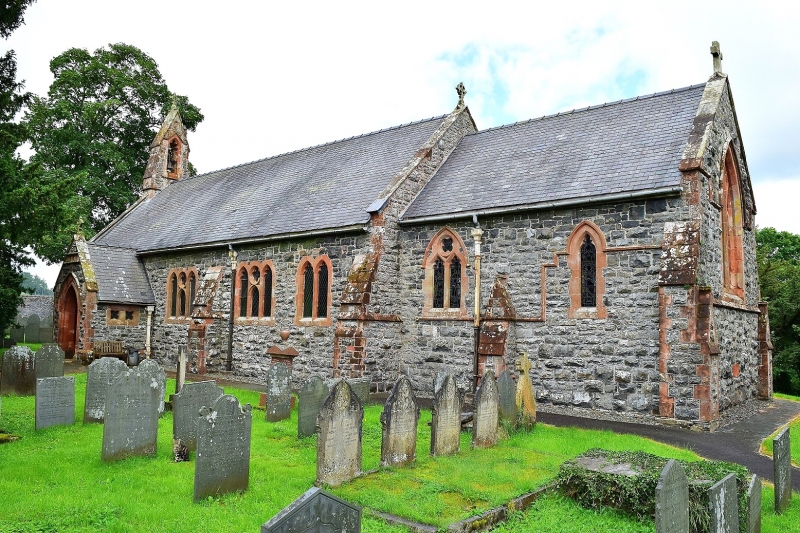 Location: The church stands in a prominent, slightly elevated position on the north side of the A458 at the centre of the village within a roughly circular churchyard enclosed for the most part by a masonry retaining wall. Within the churchyard stands a sundial, a gift of the then rector L. Richards, 1847; and also a war memorial of polished pink granite in the form of an obelisk. At the SW corner of the churchyard, the timber framed lychgate may have originated in the C17 but was extensively remodelled and repaired, according to the inscription in 1843.

History: Build on the site of an earlier Church probably on an ancient site of religious activity. A gravestone, now relocated to the interior of the church is from a C5 or C6 burial said to be located beneath the large yew tree to the SE of the porch. The present church was built in 1870 by Edward Haycock (Junior) of Shrewsbury incorporating the mediaeval roof construction and other fixtures and fittings from the earlier building.

Exterior: Early English style. Nave, chancel, vestry and porch, bellcote at W end. Snecked blue-grey masonry, rock faced with red sandstone dressings. Slate roof. The opening for the bell has a cinquefoiled head. The bellcote is supported by a buttress which contains a lancet window. Nave and chancel buttressed. Windows containing 1, 2 or 3 lights with cinquefoiled arch heads, sometimes with a quatrefoil above. Most have diamond pane glazing. The E window has a dripmould and is divided into three sections by 2 mullions which divide towards the top. The lights are cusped.

Interior: The nave has a medieval roof (c1400) from the old church. 6 arch-braced trusses with 2 cusped, raked struts at apex. Cusped wind braces. Principal rafters cusped on the inside. The lancet window at the W end has stained glass by Done and Davies of Shrewsbury. The chancel windows were built under the bequest of William Humphrey Gardner of Llyssun who died in 1909.

Furnishings: At the W end of the nave is an early Christian tombstone, 5’ high and 20" wide, which was brought into the Church from the site of the Yew Tree in 1915. It has a deeply incised inscription reading: "Here in the tomb lies Rosteece, daughter of Paterninus (aged) 13 years. In peace." It is said to date to the C5 or C6.

Font: Later Perpendicular. Octagonal bowl with small roll mouldings around the top and Tudor leaves in relief on the underside. Octagonal stem. Base probably of limestone.
A section of wood panelling from the old church has been re-erected on the S wall of the chancel and is dated 1706. Pulpit and chancel pews also reused possibly from the old church.
A series of painted panels, formerly from the gallery front of the old church, have been fixed to the N wall of the chancel at a high level/ They consist of oil painted text and illustration on wood. The text is in English and contains a date of 1772. The illustrations are faint, but include Christ, Moses. St Paul and mystical animals in various scenes.
Late medieval reliquary and shrine or reredos recorded by Haslam as plastered into the vestry wall.

Listed for its medieval fittings and furnishing, its historic importance as an early Christian site, and for its townscape value.