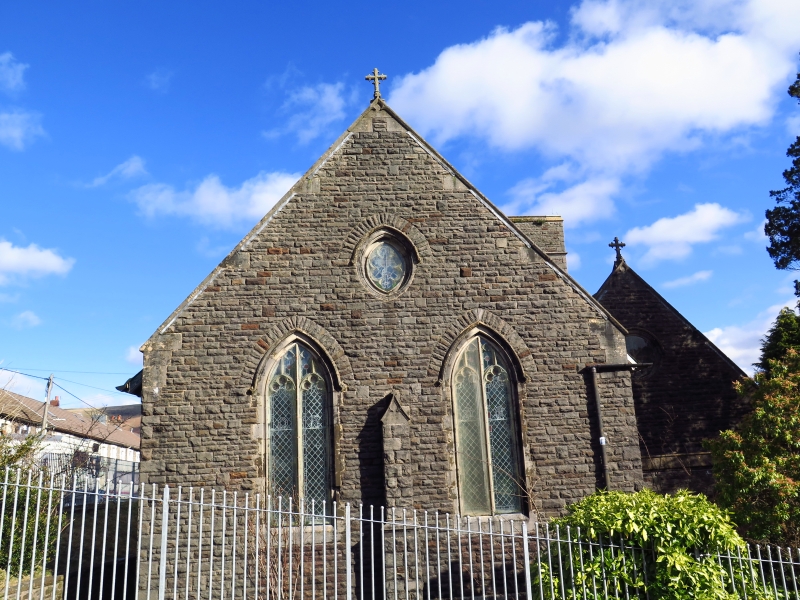 Location: Situated near the centre of Cwmparc N of Park Road, the main thoroughfare, set into the hillside with ground rising to N.

Free Gothic style. Built of snecked rockfaced sandstone with ashlar dressings; Welsh slate roof with crucifix finials. Plan of 4 bay nave, separately gabled S aisle, flat roofed SW porch, lower 3 bay chancel with large square tower against it at SE. W front has a pair of pointed arched 2 light windows with perpendicular style tracery and hoodmoulds with simple stops separated by a gabled buttress; above is an Early English style mandorla with cusped tracery. S aisle W window is a roundel with radial tracery. SW porch has four centred arched doorway with decorative spandrels and later metal gates; above is a small moulded niche with a freestanding figure of St George under a false half gabled coping; 2 three light W windows have cusped tracery. S aisle of 3 bays has 3 three light windows with cusped heads in a square headed frame, separated by tiered buttresses, and ends in a massive SE tower of 3 storeys, a single embrasure to the parapet on each face; below a bracketed string course the belfry has wide shallow corner pilasters and cusped 3 light louvred openings in a square frame. Below pilasters merge into tiered buttresses over 2 lower storeys with pair of cusped lancets at ground floor S; entrance doorway and window to E. E end has unusual 3 light window with small paired tracery lights in a stepped frame. N frontage has single cusped lancets within square headed frame to chancel and E and W nave, two triple light windows in centre bays; nave and chancel divided by tiered buttress. Deep plinth.

Listed as one of the more substantial and individual Anglican churches of the Rhondda and with an imposing tower, and as a good example of the work of Halliday.