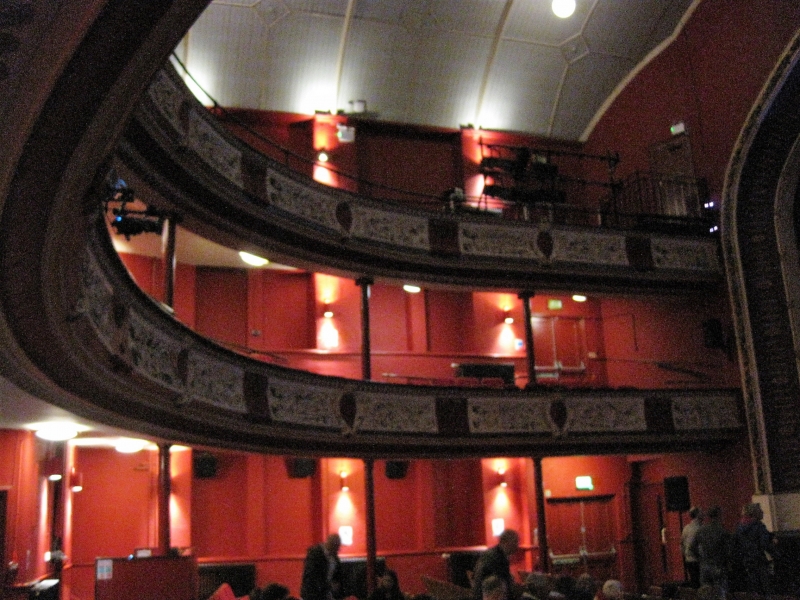 Location: Situated just off High Street/Bute Street in a central position in the town by the main railway and river crossing and Treorchy station and at the entrance to the Cwmparc valley; separate frontages o

Parc and Dare were the names of two collieries in the Cwmparc locality; in 1892 a library was constructed for the miners on Station Street designed by Jacob Rees of Pentre; the building also contained reading, smoking, guest and refreshment rooms and was financed by the miners themselves through the first mineworkers trade association. In 1912 a second adjoining building fronting Dyfodwg Street was designed by T Owen Rees and Jacob Rees and opened as a theatre and cinema in 1913, cost £13,000, contractor Albon Richards of Pentre. Jacob Rees (1844 -1933) was structural engineer with the Ocean Coal Co at Cwmparc and later practised as an architect specialising in schools, chapel and workmen's halls. In 1926 as a result of the National Coal Strike the miners were no longer able to support the hall which was sold to the Ocean Coal Co. but it was repurchased by the National Union of Mineworkers local lodge at nationalisation in 1952. It passed to Rhondda Borough Council in 1975.

The Dyfodwg Street frontage, a grand four storey classical composition, towers above and dominates the surrounding shops and housing. Built of coursed rock-faced sandstone with ashlar dressings, dark to ground floor, paler above; rendered with painted brick dressings to side and rear; Welsh slate roof with terracotta ridge tiles and ventilators; leaded fly tower dormers. A central pedimented bay breaks forward slightly; the pediment has two tiers of mouldings, a blind keyed oculus datestone and inscribed frieze 'Park & Dare Workmens'(sic) Hall'. Channelled pilasters rising through 3 storeys support the pediment, with a panel enriched by a circular motif at frieze level and surmounted by orb finials on heavily moulded bases. The 3 top storey windows are set within an applied round arched arcade with deep keystones rising to the inscription band; the windows themselves have broken pediments and aprons; renewed glazing throughout. Second and first storey windows both have decorative surrounds and are separated by pilasters, the storeys themselves by heavily moulded string courses. Ground floor is of large channelled ashlar blocks with two deep set entrance doorways with deep keystones and glazed swing doors separated by a mullioned window. The two recessed bays each have a balustraded parapet above a bracketed cornice, ashlar channelled quoin strip and a single window with renewed glazing on each storey, with ashlar surrounds and bands above and below. To side are cross bays and a range of blind windows. Surviving original glazing to rear is 1/1 horned sash.

The Station Street frontage is lower and more domestic in appearance. Built of snecked rockfaced sandstone with ashlar dressings and Welsh slate roof with terracotta ridge tiles. Also of 4 storeys including attic and semi-basement with frontage of 5 bays, 3 of which have gables with finials, small columns supporting the kneelers, and break forward; the two outer each with 2 storey canted bays with moulded sill and cornice band and pitched roof. Windows with renewed glazing are paired for the 3 central bays. Central double doorway with steep gabled surround and prominent kneelers has coloured glass overlight with ' Park and Dare Workmens Institute' in Art Nouveau lettering and steps up to interior doors. Simple two bay side frontage joins a service bay which links with the theatre block.

Listed II* as the grandest Workmen's Institute and Hall in the Rhondda with an outstanding facade and an early theatre retaining much of its original character.