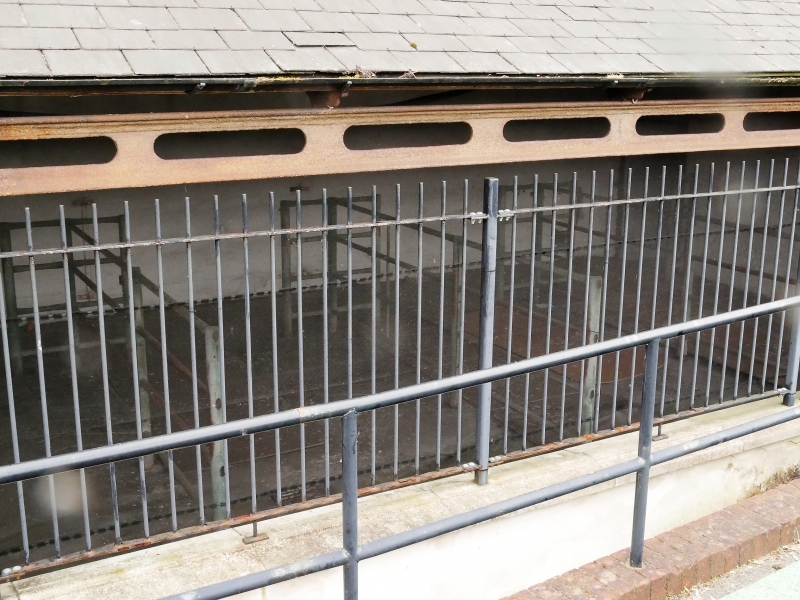 Location: Located on the S side of the cattle market, adjoining South Market Street.

Single storey cattle byre, dated 1844. Constructed in 1844 as part of the Tredegar Cattle Market built by Sir Charles Morgan, (1760-1846) who established the Tredegar Wharf Company in Pillgwenlly and who developed Commercial Road and Commercial Street nearby. The important cast-iron work surviving within was manufactured by Homfray at his Tredegar Ironworks. The well-known C H Spurgeon preached here in 1865 to crowds of over 10,000.

Constructed in coursed, sandstone ashlar with flat stone lintols with keystones. Corrugated iron to roof and rendered rear elevation (S). At E end of front (N) elevation is a projecting, pedimented, gable with circular porthole and inset cast iron plaque depicting Sir Charles Morgan with the inscription "CATTLE MARKET 1844". Central doorway flanked by two rectangular openings. W range has central doorway and two further rectangular openings to either side, all with similar lintols. Truncated at W end and infilled by modern brickwork, exposing contemporary cast iron roof trusses, with Tredegar foundry marks; each with cambered tie and central circle, of which there are ten in total.

Listed for its special interest as the best surviving part of the cattle market and as an important relic of the earliest phase of the planned development of Pillgwenlly and having important historical links with the Morgan family of Tredegar House.