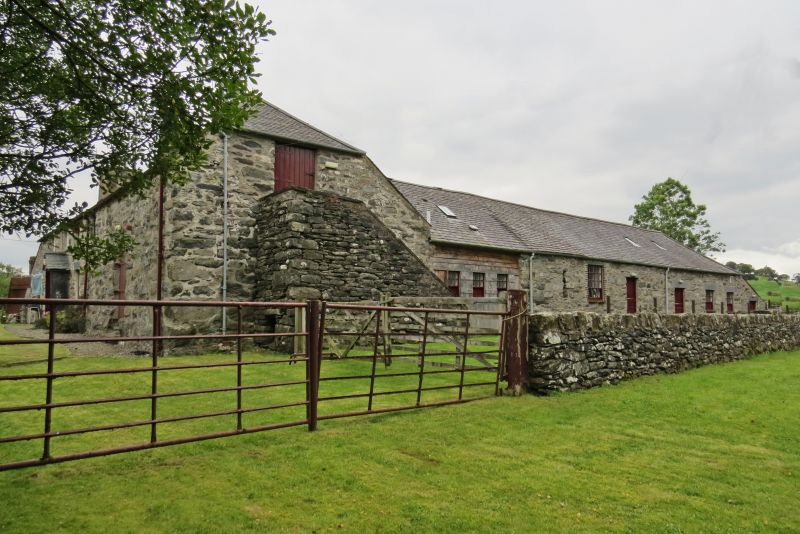 Location: Located on the S side of the A5 at the northern border of the community, approximately 2km W of Pentrefoelas; sited at the junction with the B 4407 to Ysbyty Ifan.

C18 storeyed end-chimney farmhouse with attached agricultural range forming an L-plan around a rear farmyard. Originally free-standing, and with its barn range behind and to one side, the two blocks, farm and domestic, were linked together with infill sections probably in the early C19. This was further altered during a rejustification in the third-quarter C19, carried out as part of a programme of estate improvements implemented by Lord Penrhyn of Penrhyn Castle, who had aquired the Pant Glas estate in the 1850s. Two finely shaped and chamfered cruck blades, re-used in the roof of the C19 stable addition, suggest a possible late Medieval origin for the site; the house was recorded as being thatched in the Pant Glas estate survey of 1767.

Storeyed 3-window end-chimney farmhouse with adjoining L-shaped agricultural ranges of two and one storeys. Of rubble construction with slate roofs, the front- (E) facing pitch renewed; plain chimneys with weathercoursing, that to the L part-rendered, that to the R a C19 replacement. Off-centre entrance with boarded door with plain glazed panel; this within a C20 wooden gabled porch with slate roof and plain bargeboards. Flanking C19 6-pane recessed sashes with projecting slate cills and slate lintels; small square light to far L. The first-floor windows are under the eaves; two 8-pane casements and, to the R, a 12-pane casement. Adjoining to the L a C19 lean-to with brick parapet and small brick chimney; plain entrance with boarded stable door. Beyond that is a contemporary pig sty block with slate roof, brick parapet and two enclosures. Adjoining flush to the R of the farmhouse and continuously-roofed with it, a C19 stable extension. Large central entrance via 2 slate steps, with boarded stable door and 6-pane overlight. Loading bay to upper L; half-hipped gable end. Here there is an external coped, parapetted stair giving access to an upper entrance with recessed boarded door; kennel niche under the stairs. Central dairy outshut to rear of farmhouse section; entrance to L return and 12-pane sash window as before.

The adjoining N range is stepped-down and runs parallel with the main road. This has a large modern boarded entrance to L. To the R, serving the primary barn range (the masonry break of which is visible), are two window openings, the right hand one of which is modern. To the R again, two C19 stable entrances with stable doors and beyond, further windows with C19 tooled slate lintels and modern metal-framed glazing; hipped gable end with later C19 or early C20 slated lean-to with plain opening to the front. C19 outshut to rear (farmyard side) with small 12-pane sash (lower half boarded). Stable entrance to R with a further blocked entrance beyond a C20 rendered brick lean-to.

Included for its special interest as an C18 farm complex with good C19 Penrhyn estate character, in a prominent road-side location.