A Grade I Listed Building in Bethesda, Gwynedd 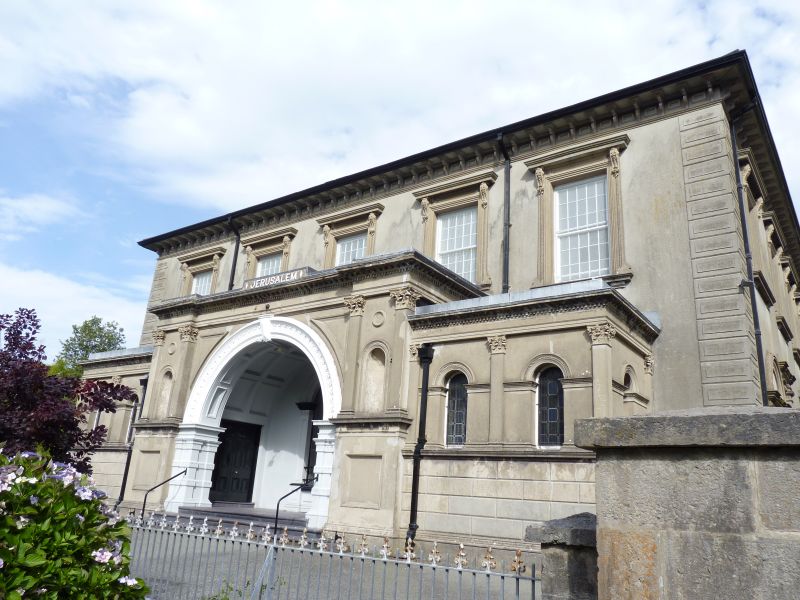 Location: Situated in centre of Bethesda, fronting onto the gardens behind the War Memorial.

Behind is very large hipped-roofed two-storey schoolroom and vestry block, with rear 6-window range of 32-pane sashes above, 24-pane below. Outside steps at W end to pilastered arched doorway between 2 sashes in similar surrounds.

1872-5 remodelling was planned to resemble an amphitheatre, and the original square is disguised totally by a curved wall with nine 30-pane sash windows in the gallery, some taking borrowed light. Pulpit wall has been altered presumably in 1903-5 for the organ loft. Gallery is U-plan on 11 plain iron columns, the front of long grained panels under continuous narrow band of pierced cast-iron. Amphitheatre plan means that both the ground floor seats under the gallery and those in the gallery are steeply raked. Within the open centre are curving pews, a half-round orchestra seat, backing onto a deacons' seat enclosure of rebated rectangular plan, i.e. with seats facing and side-on to pulpit. Pierced wood panels in narrow bands. Pulpit is a monumental design in polished mahogany, freestanding and curvaceous with polished brass rails to steps each side. Triple-curve front projecting over curved base, the main half-oval front with lavishly carved classical panel. Within a long upholstered curved ended seat.

Organ loft behind, raised to gallery level, is a very fine Renaissance-style triple-arch composition. Centre monumental pilastered and corniced frame to an arched recess, with lavish decoration to cornice, frieze, spandrels and capitals. The smaller pilasters that carry the main arch are echoed in the two narrow flanking arches which are not in corniced frames. Balustrades to flanking arches and handsome timber projecting loft to centre with 5 carved panels, each with main shell motif. The organ itself has painted pipes and classical detail to case. Main organ has two curved pipe-clusters, those to the sides have one, but pipework in left arch is dummy, screening access to loft.

Ceiling expresses the circular concept of the design and is one of the finest features of the interior. Essentially a very large saucer-domed main circle, with broad moulded surround and moulded ring to centre rose, is flanked by radiating panels with similar moulded ribs and small roses, the panels following the U-plan of the interior, leaving two spandrel panels to frame the rest of the circle. The ribs and mouldings have ornate floral undercut detail. In the centre is a gilded vase-shaped pendant with open funnel and exterior acanthus leaf decoration. Funnel is lined with mirror-glass. This may be the 'gas sunlight' by Stroude & Co of London described in the 1882 history. The pendant metal chandelier is later.

Schoolroom and vestry building has one very large room above with hipped boarded ceiling. Ground floor divided by pine partitions into one room across N end and then 6 to S, 3 each side of a spine corridor, with corner fireplaces, but capable of being combined into one by sliding partitions.

A chapel of remarkable scale and dignity unusual for the 1840s, with a richly detailed interior of the 1870s to a semi-circular plan of exceptional interest.