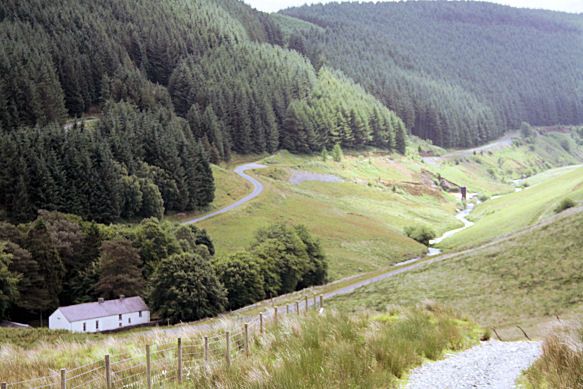 Location: Situated in extreme isolation on W bank of the Camddwr some 13 km from Tregaron, reached via the Abergwesyn road to Nant-y-maen and then the road S towards Llyn Brianne reservoir.

Calvinistic Methodist Chapel of 1828, altered in later C19. Said to have been used as the school also until 1947.

Simple interior, without galleries. Plaster ceiling with coved cornice and crude rose. Tightly packed box pews, panelled with moulded top-rail, slightly raked. Four main blocks, two facing pulpit up to back of great seat, passage and one block each side with angled pews. Two small blocks between door and pulpit each side and one on each side wall. Great seat similar to pews, simple bench with doors each end. Pulpit probably later C19 with turned balusters to steps each side, newels with finials, arched panel to pulpit front and consoles under book-rest. Painted scroll behind 'Duw cariad yw'.

Listed Grade II* as one of the best examples in Wales of an extremely isolated chapel of pre-1840 date built to serve a widely scattered congregation.