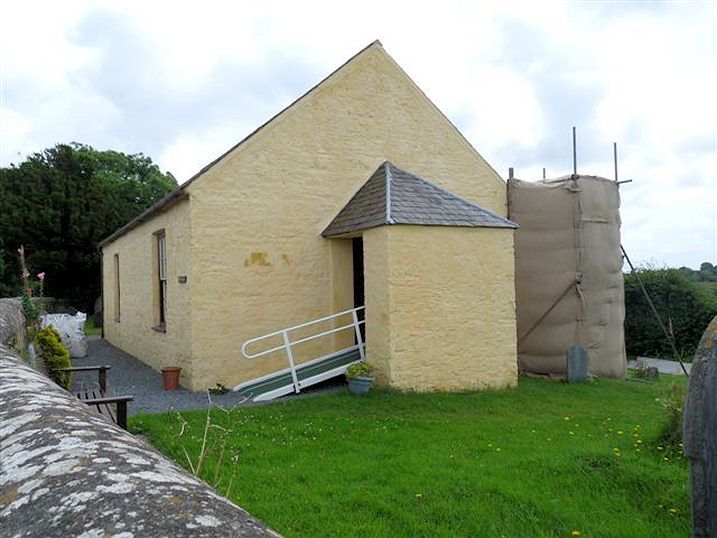 Location: At S side of an unclassified road, 1.5 km SW of Martletwy Village. Stone wall to the road with a simple iron gate.

Opened in January 1813 by the Rev. Theophilus Jones. The chapel was built largely at the initiative of the two John Allens, senr. and jnr., who contributed all the stones, lime and haulage. Tombstone evidence traces one of the elders of the Calvinistic Methodist congregation back to 1821. There are signs of extensive alteration, probably mid C19, and there was also a renovation in 1890.

The chapel originally had a level floor and a gallery, and its N entrance (probably double doors) was at the present position of the left window facing the road. In the W gable elevation there is a blocked single doorway, at a level which shows it must predate the construction of the present raking floor. It was probably an access to the gallery. The other three main windows are all of identical construction to the inserted one in the N elevation, and are set at levels which show they are contemporary with the present raking floor. The raking floor, the pews, the main window frames and the present porch and entrance are all therefore secondary. These alterations must be quite early in the history of the chapel, as no mention of them is made in the history by Evans and Symond written in 1913.

The unusual layout of the dais, however, is surely original. There is a central pulpit not elevated above the dais floor level; instead the whole sedd fawr is a raised dais with benches at either side, a front balustrade and a central flight of access steps. The marked change of level down from dais to main floor was perhaps a consequence of the original presence of a gallery, in a building of limited headroom.

The chapel is now redundant but the graveyard remains in use.

Chapel with a plain exterior, without name or ornament, lying parallel to the road. The chapel is about 13 m long by 7 m wide, with a later vestry or schoolroom at the E end and a later hip-roofed porch at the W end. The porch is open at the N side. Local uncoursed hammer-dressed sandstone, flush pointed and limewashed. Slate roof with grey tile ridge. The four main windows, two in each eaves elevation, are 12-pane sash windows without horns, dating from an early/mid C19 alteration. In the E gable is a high-level fixed light of 8 panes above the roof of the vestry. The vestry has a four-pane sash window and a boarded door. The present main entrance in the W gable elevation, dating from the same time of alteration, has double doors, each leaf of two bolection moulded panels and one flush panel.

At time of visit (1996) the chapel was very much overgrown with ivy.

At the E is an original dais raised above a flight of four steps, for the pulpit and side benches. The pulpit is rectangular, with planted mouldings on the front and side panels and an overhanging book-rest. The benches have plain panelled backs. At the front of the dais is a handrail supported on square balusters, framed into the top newels of the central staircase. The front of the dais beneath is panelled. The steps have returned nosings, each supporting two balusters. Shaped handrails to the flight, also housed into the top newel. At the bottom of each handrail is a coil over a turned bottom newel.

The pews are of a later date. Two blocks with a central passage, on a floor which rakes about 0.4 m down from W to E. Simple pew design, with a shaped moulding to the top of the pew-ends. Timber floor and dado.