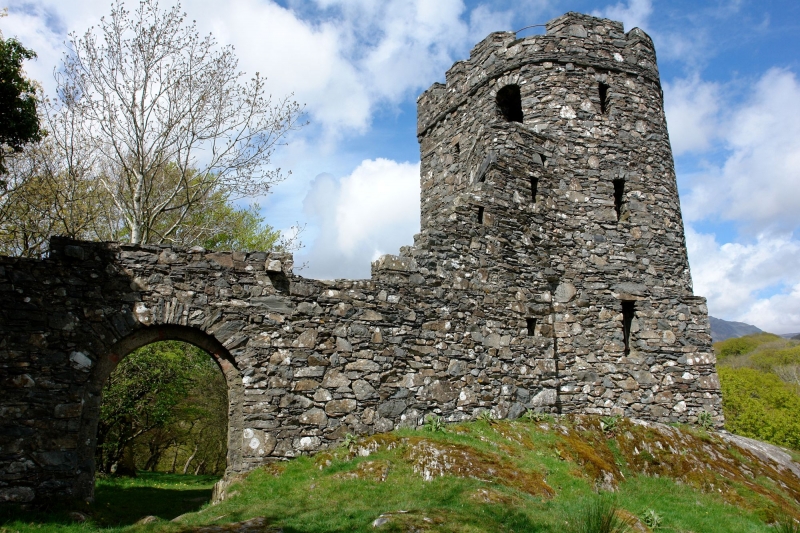 Location: Dramatically sited on a rocky hill equidistant between Plas Brondanw and Garreg and with commanding views across the Glaslyn estuary; accessed via a footpath from Plas Brondanw.

Folly tower built c1920 by Sir Clough Williams-Ellis, architect, owner of the Brondanw estate. An inscribed slate tablet above its entrance records: 'This outlook tower was subscribed for as a wedding present to Clough Williams-Ellis and his bride Amabel Strachey in 1915 by his brother officers of the Welsh Guards. In the second World War it was prepared as a local military strongpoint to repel the expected German invasion.'

3-storey battlemented drum tower with adjoining 'ruined' wall, and terminating in a 'ruined' cylindrical tower to the W. Of local rubble construction on rock foundations. The tower is approximately 11m high and is D-shaped above the basement storey, with its flat side facing in the direction of Plas Brondanw. Each storey has large rectangular slit-lights to the S and E, with a further light to the centre of the angled basement floor, facing SE. The flat (N) side has a pointed-arched entrance to the basement storey with oval slate dedication plaque above; chamfered oak door-frame with modern boarded door. Irregularly-spaced windows to each floor, as before. Further windows to the E side with, in the angle between the tower and the attendant wall, a further, deeply-recessed basement entrance; door and frame as before. To the R of this entrance is an arched niche in the wall with a small light within. Above this a narrow flight of cantilevered stone steps runs up the wall to a small entrance turret in the angle between the tower and wall, containing a first-floor entrance to the former. Its flat roof is parapeted and forms a small balcony accessible via an arched doorway from the upper floor. Crenellated battlements with corbel course in Welsh medieval style; at the NE corner a raised section, relating to the access. Flat cement roof with broken wooden flagpole.

The adjoining wall runs westwards for some 12m at an avarage height of 2.5m. In the centre is an open round-arched entrance with an inner arch of rendered brick; to the W of this a small light. The wall ends in a fragmented round tower, at its highest approximately 6m. Beyond, the wall steps down and returns to the S in a semi-circular bow containing stone benching; a further open arch adjoins to S before the wall steps down and terminates.

Included as a folly by Clough Williams-Ellis and a prominent landmark on the Plas Brondanw estate.