Main Mill Building at Museum of the Welsh Woollen Industry. 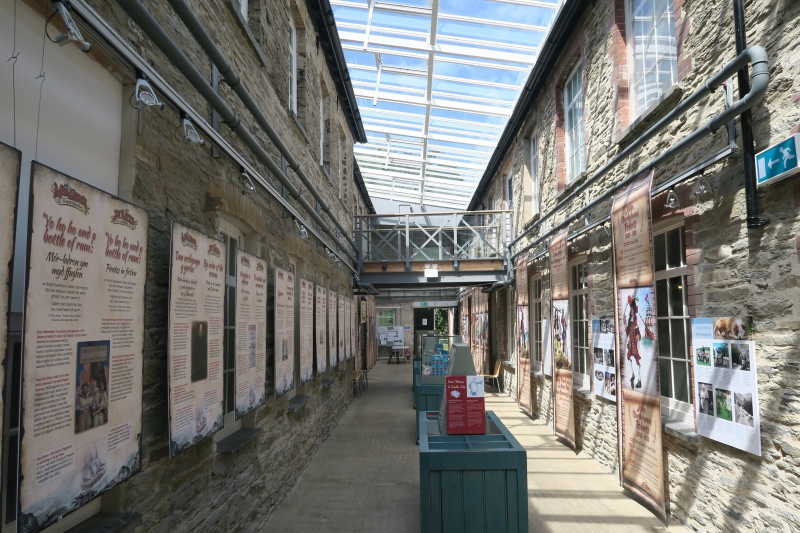 Location: Museum complex located to N end of Drefach village, to W of the Drefach-Henllan road. Main building is below road level, N of office buildings at site entrance.

The building was formerly part of Cambrian Mill, built by David Lewis between 1902, and 1912, on a site already used for a woollen mill since c.1840. The southerly range was rebuilt after a fire in 1919. By the later C19, the middle Teifi Valley had supplanted Newtown, Powys ("the Leeds of Wales") as the most important area in Wales for the manufacture of woollen textiles. Dre-fach Felindre (" the Huddersfield of Wales") became the most important centre for the industry, thriving on the provision of flannel cloths for the expanding industrial areas of South Wales, and also supplying customers in London, Birmingham, and Glasgow. Cambrian Mill became the largest and most important of the Dre-fach Mills. Although a water wheel provided power for milling and washing equipment, a gas engine provided the main power for most of the machinery. The slump of the 1920s and 1930s devastated the industry. Cambrian Mills changed hands in the 1950s, but production continued. In the 1970s the mill became the Museum of the Welsh Woollen Industry, whose aim was to present the history of an important rural industry in the authentic location of a large comprehensive woollen mill.

The buildings retain early C20 roof structures to lofts, and wooden floors and beams, strengthened in places with iron stanchions. Ground floor has quarry tiles. Power shafts remain in situ. The machinery is a mixture of units from the working mill, (but said to have been imported in 1950s), including mule with 400 spindles to 1st floor rear block, and museum exhibits intended to illustrate the history of the woollen industry.

Included as integral part of Cambrian Mill, the most ambitious surviving complex of woollen mill buildings in the area once known as "The Huddersfield of Wales". Group value with other listed buildings on this site.