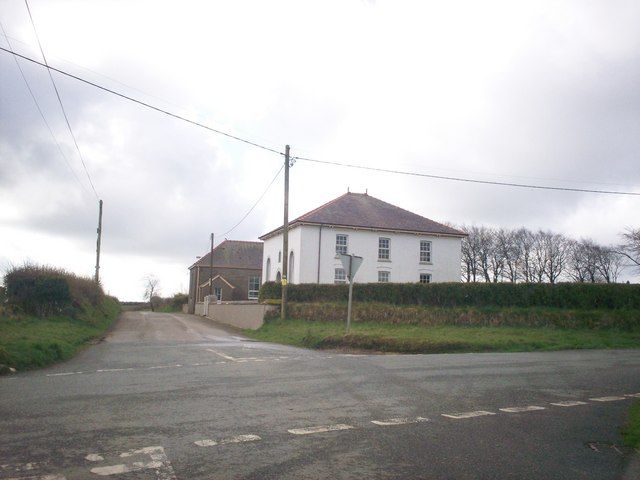 Location: Situated just S of the junction of minor roads approximately 0.6km NE of the main junction in Efailwen.

Independent chapel of 1836, completely rebuilt in 1860-1. The original plaque is reset on the entrance gatepier.

Square interior with unusual 4-sided gallery on 7 thin iron columns. Gallery front in long horizontal panels with square panels between. Fourth side is carried over entrance lobby. Panelled painted grained pews with doors, in 3 blocks, the rear pews raked upwards. Some raked inward-facing pews each side of pulpit. Three-sided set fawr also panelled with doors. Pulpit backs onto lobby and has panel front with bookrest, ornate open neo-Jacobean fretwork rail each side. Three seats below, centre seat with carved scrolled armrests. Steps up each side with ramped rail over panelling, but above rail is inserted piece of pierced fretwork filling out the curve, and further fretwork over curved rear corners of platform. Timber pulpit back with thick crest of opposed scrolls in ogee form. Traceried window each side into lobby. Boarded ceiling with plaster cornice. Lobby has stone steps to gallery.

Listed for its special architectural interest as a square-plan chapel, with fine interior, unusual for the 4-sided gallery, raked pews and pulpit backed onto lobby.