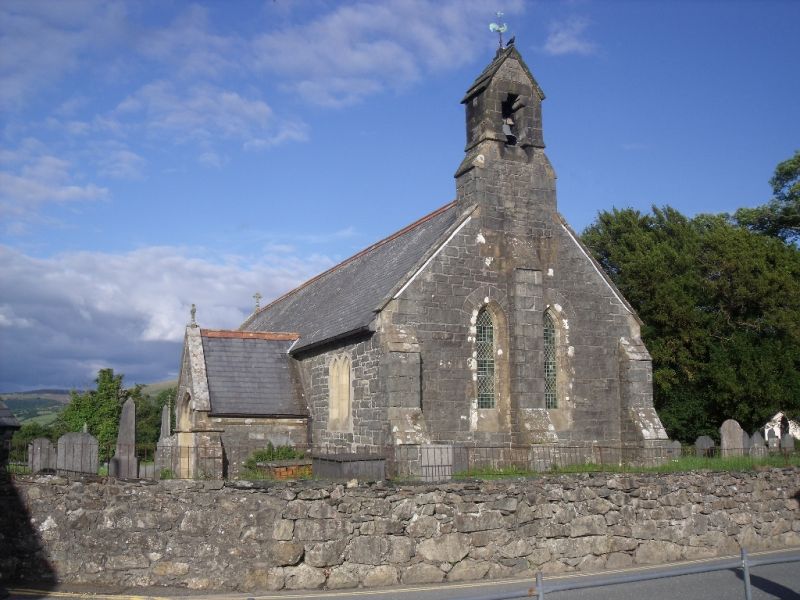 Location: Within its own raised and walled churchyard in the centre of the village.

Victorian parish church erected in 1873 to replace its medieval predecessor (demolished 1872). The new church was designed by the architect Edmund B Ferrey in 'mixed Gothic style', and was built at a cost of £1,600. Amongst features incorporated from the earlier church is a particularly fine stone effigy of John ap Gruffydd ap Madoc ap Iorwerth of Ganllyn dated 1395.

Modest mid-Victorian parish church, consisting of a continuous nave and chancel with gabled N porch, and shorter S aisle with vestry extrusion adjoining to the E. Of coursed, rough-dressed slatestone blocks with Wrexham sandstone dressings; medium-pitched slate roofs with tiled ridges. The gables have slab-coped and kneelered parapets, those to the E with gable crosses. The nave W gable has a 2-stage bellcote with lapped copings and shouldered-arched bell-opening; surmounting iron weathervane. Below, 2 tall lancets flank a tall stepped buttress, with smaller outer buttresses, flush with the nave N and S walls. The N side has a 4-bay nave section and a 3-bay chancel section, the latter with stepped, set-back buttresses at the E end (L) and western junction with the nave (R). The nave has a gabled N porch to the second bay from the R, with segmentally-arched entrance and coped gable; roll-moulded soffit, chamfered reveals and moulded stringcourse, the latter returned onto short flanking buttresses flush with the front face. Pointed-arched inner entrance with roll-moulding and deeply-recessed boarded door; simple roof of clustered truss type. Paired lancet windows to the nave section, with hollow-chamfered jambs and steeply-splayed sills. The chancel windows are simple lancets with roll-moulded jambs and trefoil inner tracery heads. Each light is placed within a slight recess with dividing pilasters. A continuous moulded stringcourse returns onto the buttresses at either end and around onto the E end.

Simple lancet group to the E end with broader and taller central light. The SW nave wall is visible for 2 bays before the S aisle abuts it to the R (E). This has paired lancets to the L and a single lancet to the R. The S aisle has 3 paired lancets, 2 to the L, with roll-moulded decoration as before, and a further one to the R (E end) with cusped heads to the lights. The latter window is flanked by stepped buttresses. The S aisle E gable has a simple rose window with trefoil tracery. A single-storey vestry lean-to extrudes in the angle between the end gable of the aisle and the longer chancel, its end wall terminating slightly short of the line of the chancel E end. Parapet with flush stepped buttress. Pointed-arched entrance to the S side with roll-moulded soffit and recessed boarded door; a flight of 6 stone steps leads up to this. To the R of the entrance is a rectangular light with chamfered sides and simple trefoil head. The W gable end of the S aisle has a cusped rose window to its apex and a stepped buttress flush with the S wall.

Four-bay nave with arched-braced collar trusses carried on false hammerbeams; these have simple ocular tracery above the collars and diagonal boarding behind plain rafters. Simple polychromed tiled pavement (red/yellow/black) with Victorian pitch pine pews to the sides. At the W end is an octagonal limestone font with sunk quatrefoil oculi to alternate faces; on an octagonal base with chamfered lower section. Pulpit in similar style, also octagonal, with recessed foliated squares to each face and a row of small oculi containing trefoil decoration below a chamfered rail; circular chamfered plinth and a flight of 3 steps ascending from the E. A 2-bay arcade divides the nave from the shorter S aisle. This has a pointed arch in Early English style with quarter-round and hollow-chamfered mouldings; central column with moulded base and capital.

Pointed chancel arch with roll-moulding carried at the sides on dentilated wall corbels. The chancel itself is stepped-up and has a polychromed tiled pavement. Simple Victorian Gothic choirstalls of pitch pine. The sanctuary is similarly stepped-up with tiled pavement. Moulded oak altar rails carried on 4 square polychromed iron posts with scrolled spandrel brackets. Retable with framed oak stiles and rails and veneered oak infills; simple arcading to raised, dentilated and pedimented outer sections, flanking the E window to L and R. The chancel roof is a shallow-pointed waggon roof with 2 moulded transverse ribs and 3 smaller moulded secondary ribs; these divide the roof into 6 compartments on each side. Each has c1900 Art Nouveau style stencil decoration in pale blue and gold. Welsh painted inscription in Black Letter Gothic script below the moulded wall plate on both sides.

Monuments etc: within the N wall of the chancel is a very fine military effigy of Ieuan ap Gruffydd ap Madoc ap Iorweth of Glanllyn, dated 1395. Of limestone, and slightly over-life sized, the effigy is of conventional form, with contemporary arms and armour and a raised Latin inscription in Lombardic capitals. The effigy is contained within a (C19) shouldered-arched niche. On the S wall of the S aisle is a funerary tablet to Ellis Lewis of Llwyn Gwern and his issue, erected by his great grand-daughter Elizabeth Jones c1720: grey marble with white marble inscription plaque; pediment with cherub's head below and heraldic polychromed cartouche above. Nearby are two framed benefactors' boards with painted inscriptions, one dated 1725, the other early C19. Occupying the arch between the chancel and the S aisle is a free-standing late Victorian pine organ in simple Gothic style; by Bishop and Sons of London. Standing against the E wall of the S aisle is a second-quarter or mid C19, lead-lined, full-immersion baptismal font; of rectangular form and of pine construction, with coved lid.

Stained and painted glass: The E window has a large Assumption scene, probably contemporary with the rebuilding of c1873. The eastern-most nave S window has an early C20 grisaille window depicting the Crucifixion.

Listed as a mid-Victorian village church on an early site; graded II* for the especially fine late medieval effigy, one of the most important of its type and date in North Wales.