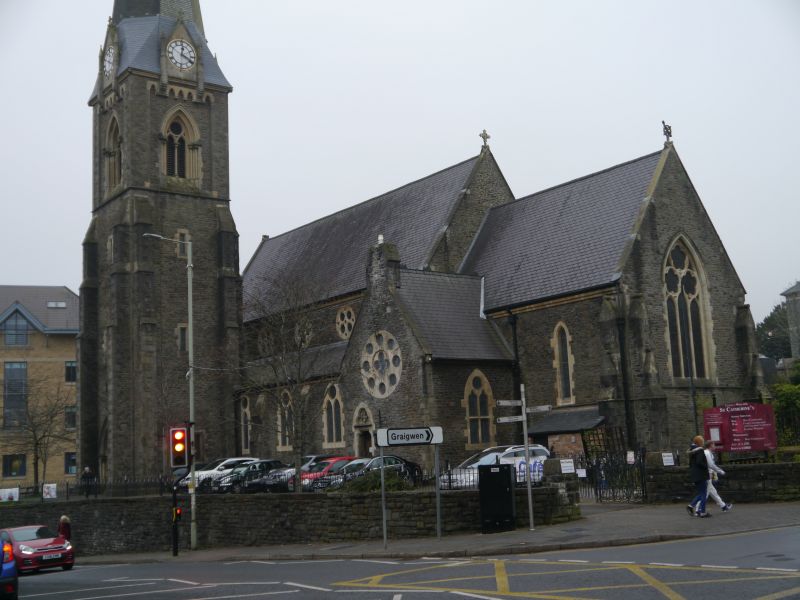 Location: Prominently sited in its own churchyard raised above the level of Gelliwastad Road.

Built in 1868 by John Norton, architect of London. The design of the interior was influenced by G E Street's St James the Less at Westminster, London, built in 1859, and was a development from Norton's own St David's church in Neath, of 1864-6. The N aisle was added in similar style to the S aisle in 1885, a N vestry in 1915, and the W porch in 1933 (all the dates are on the building). In 1890 the church was restored by Kempson & Fowler, who added the clock faces to the tower. In 1919 Sir Giles Gilbert Scott modified the chancel by whitewashing the walls and adding new stalls and reredos.

The 5-bay nave has circular plate tracery windows to the clerestory, while the aisle has, in the two R-hand bays, 2-light geometrical windows and buttresses. The tower occupies the bay set back from the W end of S aisle, flanking which are single aisle windows with circular tracery heads. The 4-stage tower and spire is the dominant feature in the Pontypridd townscape. It has set-back buttresses to the lower 3 stages. The lower stage was the original porch. The doorway on the S side has two orders of shafts with foliage capitals, the shafts continuing into the arch as roll mouldings. A tympanum has a moulded string course above the shouldered lintel of the doorway. Above the arch is a niche with cusped arch, flanking shafts carrying pinnacles and a crocketed gable, all of which are slightly corbelled out. The niche has a figure of St Catherine. The W and E faces have 3 narrow windows in the lower stage, while at the NW angle is a segmental-headed doorway to the stair turret. In the second and third stages are small narrow windows. A string course is below the upper stage. This has 2-light belfry windows in each face, which have 2 orders of nook shafts and hoods with foliage stops, and louvres. The belfry windows are recessed beneath an arcaded frieze, to the centre of which are pairs of shafts that are carried up and turn to pinnacles flanking gabled clock faces. These project from the spire like lucarnes. The clocks have round faces. Beneath the tall splay-footed spire is a moulded cornice.

The shallow S transept, housing the organ, is lower than the chancel and has a stone end stack to the ridge. It has a circular plate tracery window and a doorway with shouldered lintel lower L beneath a cusped tympanum with a cross in relief. In the R side wall is a 2-light window with transom. The lower and narrower chancel has set-back buttresses with gablets to the offsets, and a string course to sill level. In the S and N wall are single lancets. The E window is 3-light.

The N vestry, added in 1915, has a 2-light N window flanked by lancets and with 3 stepped vents below the apex. The doorway is on the W side projecting in front of the N aisle and has a 2-centred head. To its L is a foundation tablet. The N aisle has 2-light windows and buttresses, while the nave has clerestory windows similar to the S side. The aisles both have 2-light W window, with a 4-light W window to the nave. Below the nave W window is an added porch in similar style to the remainder. A foundation tablet is in the W wall. The W doorway has 2 orders of shafts carried up as roll mouldings in the arch. S doorway has a shouldered lintel below and arched tympanum, which has a cross in relief. The roof is concealed by a parapet of circles with blind quatrefoils.

The base of the tower was the original porch. Its 3-light side windows have round colonnettes under shouldered lintels. The S doorway is cusped and heavily moulded with 3 orders of nook shafts, foliage capitals and moulded arch. The double S doors have elaborate strap hinges.

The polychrome interior is faced with red brick, but with black-brick patterning, including crosses, stars of David and plain banding, and pale stone bands. The nave arcades have round piers alternately with crocket capitals and square abaci in early French style, and moulded capitals. The arches have red and black brick and Bath stone dressings, creating a rich polychrome effect, in addition to which the arches have cut brick zigzags. The tall narrow chancel arch is similar but richer, with foliage friezes and trails, while its inner order stands on pairs of short marble shafts on corbels and with crocket capitals. Alpha and Omega are inscribed in black brick roundels to the spandrels. The clerestory windows have polychrome segmental rere arches and sill bands. The nave and chancel both have roofs of closely-spaced arched braces. The nave W doorway, of 1933, has a 2-centred arch and double half-lit doors.

The chancel has a marble floor reached up steps, added by Scott in 1919. The E window has a moulded rere arch on attached shafts with annulets and crocket capitals, and a hood mould with head stops.

The font has a moulded square bowl with round panels having relief carvings of a cross, Alpha and Omega and the IHS monogram. It stands on a thin square pedestal and outer rows of detached shafts which are alternately round and polygonal. The pulpit is dated 1919, is polygonal with blind Gothic tracery panels. The benches are plain. The choir stalls have panelled ends and front, and a canopied back beneath open Gothic cresting. The priests stalls beneath the chancel arch have similar canopies and cresting. The chancel has a reredos of the Last Supper, part of Scott's modifications.

Numerous windows retain stained glass. The principal and most important scheme is the 5 windows in the N aisle of c1901-12, one of which is signed by R J Newbery of London. The sequence narrates scenes from the history of the church in Wales. It begins with Christ calling for the word to be preached to the Gentiles, followed by: Caratacus imprisoned at Rome; St Illtyd teaching Padarn, Catwg, Teilo and David; British bishops at the Council of Arles in 314; St David preaching at Llandewi Brefi; the visit of St Augustine; Archbishop Baldwin preaching the Crusades; William Morgan distributing the Welsh Bible; the Boer War and the mission to Africa. The tracery lights show the arms of the 4 dioceses of Wales - Bangor, Llandaff, St Asaph and St David - and the archdiocese of Canterbury.

The nave has a W window commemorating the Great War, showing the patron saints George, Andrew, Patrick and David above Bible scenes of David and Goliath, Samson with the jaw bone of an ass, Moses, and the Walls of Jericho. The chancel N and S windows, both dated 1923, shows SS Catherine and Cecilia. The E window is entitled The Good Shepherd and has several New Testament Scenes. In the S aisle, at the E end, are 2 windows also with New Testament Scenes and both probably by Newbery: one, dated 1898, shows the Ascension and Crucifixion, while the other, of 1903, shows 'Suffer the Children' and Christ in the Temple. Other undated windows show the Nativity, 'Suffer the Children', with the Visitation of the Archangel Gabriel in the W window, and the nativity in the N aisle W window.

Listed grade II* for its architectural importance; St Catherine is a dominant focus of the town, has a fine polychrome interior and detail, including stained glass.