A Grade I Listed Building in Harlech, Gwynedd 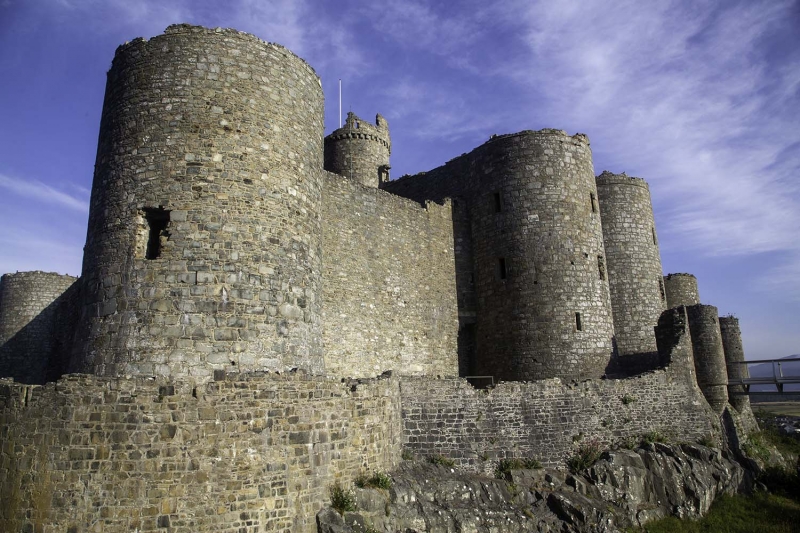 Location: Imposingly sited in the centre of the town with dramatic views across Tremadog Bay and towards Snowdonia.

Harlech castle is regarded as one of the most important medieval castles in Wales and is a textbook example of concentric castle design. It was built by the English King Edward I following his conquest of Wales, the main work being constructed between 1283 and 1289 with additions of c1295 and 1323-4; the overall cost is recorded as around £9,500 (in the region of £9.5 million in current terms). Harlech belongs to a series of Royal castles designed by Edward's chief military engineer, the Savoyard Master James of St. George, which rank amongst the most highly sophisticated and innovative examples of military engineering in contemporary Europe. Master James was himself created its first constable in 1290, and received a salary of 100 marks a year.

Historically the castle has seen significant action: in 1294 the English garrison withstood a siege by the Welsh under Madog; in the Spring of1404 Owain Glyndwr and his forces took the castle which, for the next five years became his court and capital; during the Wars of the Roses the castle was held by the Welsh Lancastrians before surrendering to the besieging Yorkists (as immortalised in the song 'Men of Harlech'). The castle's last action was in the Civil War. In 1647 the Royalist garrison under Colonel William Owen surrendered to the Parliamentarians; it was the last mainland British castle to hold out for King Charles I.

Masonry castle, now roofless; of limestone and granite construction faced with roughly-squared and coursed blocks; sandstone dressings to the openings; rock foundations. The castle is of the concentric type and occupies a tight, restricted site on a natural rock outcrop. The main defences consist of a four round towers placed at the corners of a roughly rectangular high-walled inner ward, with a lower-walled outer ward forming a narrow secondary line of defence. The latter broadly follows the line of the inner ward, though its walls have been reduced in height.

In the centre of the inner ward's eastern (town-facing) wall is a large square gatehouse block. This consists of a pair of high D-shaped drum towers to the front, and a pair of narrower stair towers to the rear, the latter rising up two stages above the inner ward's corner towers and one stage above the paired front towers. The hall, chapel, service and storage buildings were ranged around the N, S and W sides, with the well located against the N wall. Of these buildings, only the walls of the gabled chapel stand to any height; the remainder is reduced to foundation level. The gatehouse housed the principal rooms, arranged as lavishly-appointed suites, one on each of the upper floors. The first-floor apartment probably served as the constable's quarters, whilst the upper floor rooms, of rather finer quality of detail, would have been reserved for important visitors such as the King and his circle. Access to these apartments was from the inner ward. Here an external stone stair, arranged in three straight flights, leads to a round-arched entrance off-centre to the L on the gatehouse's 3-window inner elevation. The windows to the upper apartments have finely-cut hollow-chamfered jambs and segmental heads, formerly with Decorated tracery lights, typical of the Edwardian Court Style. Various fragmentary fireplaces survive, mostly with stone hoods with decorative corbels. The gatehouse was conceived as an independently defensible unit, and correspondingly could withstand assault from the inner ward, should this be taken. The main approach is in the form of a tunnel entrance between the front towers. This leads through to the inner ward via a system of defences including portcullises, gates and murderholes. The portcullises were operated from the first floor and were therefore under the constable's direct control.

The outer ward has a postern gate, comprising a gateway between small turrets, corbelled-out from the wall; a complex bridge system with further gates and a large drawbridge no longer survives. On the N side is a postern gate with small D-shaped drum towers. This gives access to 'Castle Rock', the rocky plateau which provides the site. A wall runs north-eastwards and curves around and down to protect the rock on this side. At the foot of the rock, at the north-western point, is the 'Gate-Next-the-Sea', where supplies were landed by ship. This gateway had its own drawbridge and portcullis system and was further covered by two rock-cut engine platforms above. It was linked to the main castle by a walled and defended track, known as the 'Way From the Sea', which winds its way up along the E and S sides of the rock.

Listed Grade I as one of the finest and most important medieval castles in Wales; one of the Edwardian conquest castles designed by Master James of St George; for a time Owen Glyndwr's seat of government.