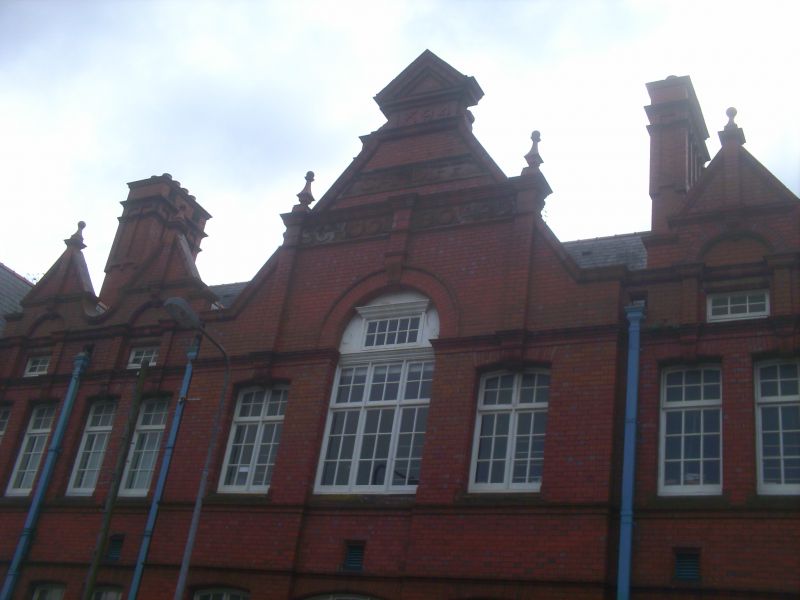 Location: The school faces directly on to Penywain Road, with flanking playground walls with gateways.

Built 1894 by E.W.M. Corbett, architect of Cardiff, for the Cardiff School Board to serve the developing residential district of north Roath. The contractor was Harry Gibbons of Cardiff and the total cost of building, including a caretaker's house, was nearly £17,000. Designed to accommodate over 1250 pupils, in common with other Board school it was designed with a main block housing girls' school in the lower storey and boys' school in the upper storey, with a detached block for infants.

A 2-storey school in Queen-Anne style, of 5 main bays, of brick with terracotta and red Carlisle stone detail, with renewed slate roof behind coped terracotta gables, and 4 panelled brick ridge stacks. The front elevation, facing N to Penywain Road, has central and outer gabled bays, of which the outer bays project slightly further forward than the central bay. The windows are taller in the lower storey, have mainly cambered heads, and wooden mullions and transoms with small-pane glazing incorporating casements below pivoting lights, sill bands and a string course over the ground-floor windows.

The 3-window central bay has 2-light outer windows and 3-light central window, which in the upper storey has a round-headed tympanum framing a small-pane window under a cornice and with scrolled stucco wings. The upper-storey windows have fluted key blocks below pilasters framing 2 relief inscription bands in Carlisle stone commemorating the school's erection by the Cardiff School Board. The outer pilasters are crowned by pinnacles and frame a moulded cornice over the lower inscription band. The apex is given pediment treatment, over a dated relief inscription in terracotta.

The 4-window bays R and L of centre have narrow single-light windows which, in the upper storey, have moulded keystones that carry pilasters framing 2 round-headed dormer windows. The dormers have pivoting lights, blank tympana, and keys carrying shafts to the apex of each gable, which have brick finials. In the outer 2-window gabled bays the 3-light windows are slightly recessed between broad pilasters. The round-headed upper-storey windows have glazed tympana similar to the central bay. Pilasters standing on the keystones frame narrow vents, in the centre of which is a further pilaster carried up as a pinnacle.

In the R (W) side wall windows and doors are replaced in original openings. The upper storey has a thin moulded sill band, while the lower storey has a thin moulded string course above the openings. To the centre is a tall window in each storey, which in the upper storey is within in an architrave and is carried up above the eaves under a simple pediment. To the R of centre the roof pitch is lower. Both storeys have small windows R of centre, while the entrance to the original boys' school is lower R. The round-headed doorway in enriched by a fluted key block, pilasters and an entablature with 'boys' in relief terracotta.

The plainer, near-symmetrical rear (S) has gabled outer bays, then deeply recessed bays, with double-pitched rear wing to the centre. Most of the windows are replaced in original openings. From the L side, a single upper storey window is replaced in the outer gabled bay, below which a single-storey assembly hall was added in 1975. To its R the recessed bay has 2 small-pane windows in the upper storey and a flat-roofed projection added below. The rear wing has, in the L-hand gable, a large window lower R with 2 narrow windows above it, and an inserted window lower L. The 4-window R-hand gable is wider and has an octagonal wooden bellcote with cusped openings in each facet and lead-covered pyramidal roof with finial. In the recessed bay on the R side of the rear wing is the entrance to the original girls' school. A relief inscription in Carlisle stone is above the replaced door, which has small flanking windows, and a wide segmental-headed overlight with pivoting windows. Above it is a balcony with moulded coping to a brick parapet, to which escape stairs have been added. In the upper storey is a small-pane window L while to the R is a boarded door with overlight. The R-hand gabled bay retains 2-light small-pane windows.

The L(E) side wall has banding similar to the R side wall, and a projecting bay to the centre. This has a replaced door under an original segmental overlight, 2 tall narrow upper-storey small-pane windows carried above the eaves under a simple pediment, and with an added external stack on its R side. To the L of the central bay the eaves level is higher. Immediately L is a cross window in each storey, with 2 replaced windows further L.

The lower storey was the girls school and is planned around a long and unusually wide central corridor giving access to the classrooms. The corridor, which has a boarded wainscot and retains 2 segmental-headed fireplaces enclosed within cupboards, also served as a single school room or assembly hall. The doorways to the classrooms have half-lit panelled doors with large small-pane overlights incorporating hopper windows. The classrooms have interconnecting doorways and retain some fireplaces with moulded surrounds. The wing on the S side of the corridor is altered to accommodate cloak rooms and indoor toilets. Offices are at the E end.

From the boys' entrance at the W end is a dog-leg stair with glazed tile dado. The upper storey has a similar plan and detail to the lower storey. The classrooms at the E and W ends have 3-bay arched-brace roofs on stone corbels, although temporary ceilings are inserted below collar beam level.

Listed with the adjacent Infants block for its architectural interest as a striking Board School in the Queen-Anne style favoured in the late C19, with a well-preserved front, and unusual interior plan of wide central corridor instead of an assembly hall.