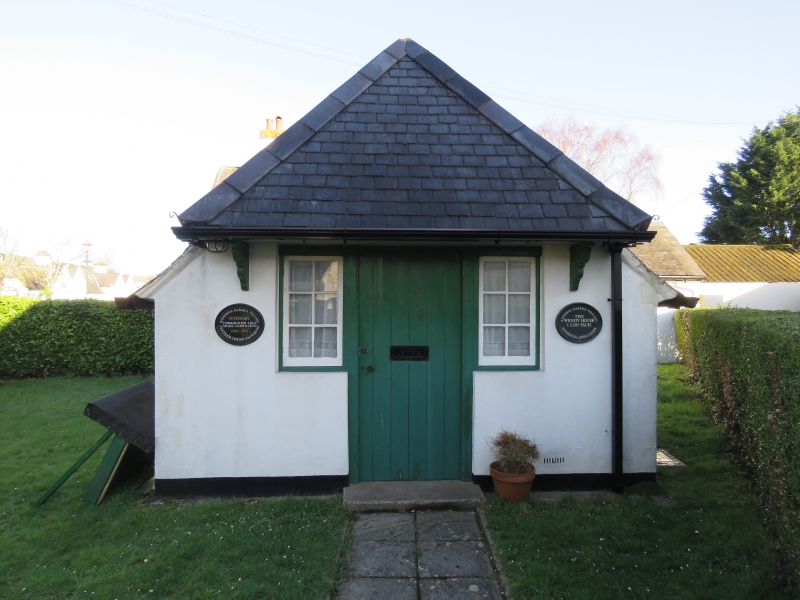 Location: On a small lane/footpath leading from the main thoroughfare Heol-y-deri to the green, Y Groes; close to No.16 Y Groes.

Garden City movement began at turn of C19/C20; Garden City Association was formed and a seminal conference held at Bourneville Birmingham in 1901. Pioneer developments were at Hampstead Garden Suburb and Letchworth. Aim was to provide workers with modest but good quality housing on the cottage principle in healthy green surroundings incorporating open spaces, adequate private gardens, with hedges and trees lining the roads. Garden Village houses were also amongst the first small houses to have inside lavatories, bathrooms, and to incorporate dpcs. In 1911 the Cardiff Workers' Cooperative Garden Village Society was formed which bought for development an area of Pentwyn Estate by Rhiwbina Halt. Raymond Unwin, a leading light in the movement, was invited to provide plans. Contemporary posters c 1913 issued by the Society and also the Garden Village Management Committee promoted it as 'Rhubina Fields', a suburb with convenient transport 'Rail from Rhymney Station, Motor Bus from North Road' and 'From Work to Home by Train or Bus. Gardening - Tennis - Country Walks.' Originally over 1000 houses were envisaged. First area to be developed in 1912-13 was the 'Village Green' Y Groes Nos. 1-22, together with Nos. 2-20 Lon Isa, an E/W road to the N, and Nos. 2-22 Lon-y-dail, a tree-lined N/S avenue to W; architect A H Mottram of Parker and Unwin and builder J O West. Next area to be developed in 1914 though only transferred to Garden Village in 1917 was Pen-y-dre, to S alongside a stream and incorporating footbridges; architect H Avray Tipping or assistant Eric Francis. T Alwyn Lloyd became architect in 1915 and continued the development to W, including a house for himself No. 11 Heol Wen which dominates Pen-y-dre. In 1920, 93 further houses were built and in 1922 another 26. School added in 1928. Garages began to be added 1930s, though by now plans were suffering a downturn. The Society employed its own staff of workmen to maintain the buildings. Houses were originally painted in cream with Buckingham Green windows. Rhiwbina Garden Village Ltd was wound up in 1981, a Conservation Area including almost all the development having been created in 1976.

Very small building in manner of a play-house which served as an office. Roughcast rendered with roof of small slates with deep swept eaves to side over small single and double lights. Low single storey. Hipped roof to front gable descends to form a bracketed hood over boarded entrance door flanked by single small pane lights. Plaques either side record Rhiwbina Garden Village Conservation Area and Residents Association.

Listed as an integral part of the core of Rhiwbina Garden Village.