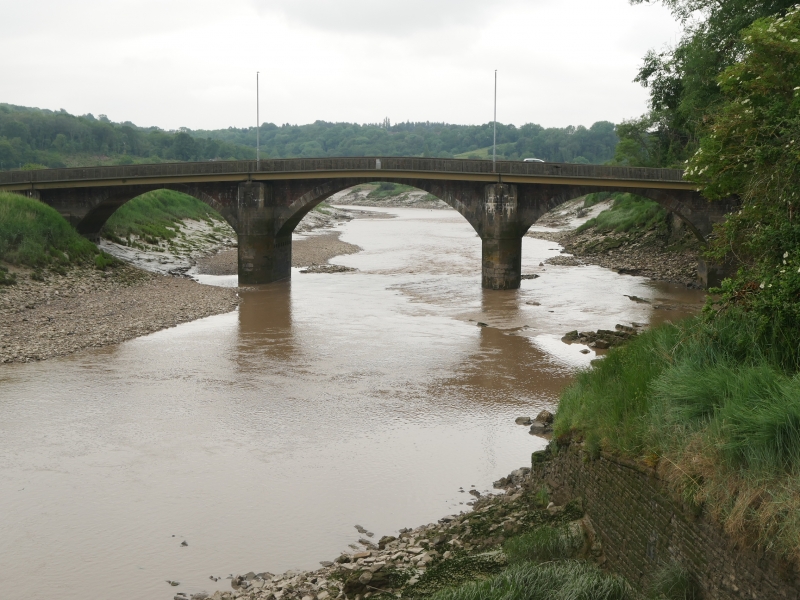 Location: At the southern entrance to Caerleon carrying the main road from Newport (B4596).

Caerleon Bridge was built in 1806-12 by David Edwards (Hockey suggests 'Mr Jessop', probably William Jessop [1781-1826] as engineer). The contractor was Mr Hodgekinson. It marked the end of Caerleon as a port as the larger ships could no longer reach the quay, but it had already been by-passed by the new docks in Newport, and their direct access to the industrial areas inland via the Monmouthshire Canal which had opened in 1799, and the early tramroads. The building of this bridge is part of the improvement of the road from Newport to Usk. Caerleon Road was also constructed in 1810, which by-passed The Village and allowed the removal of the old timber bridge. The footbridge was added to the upstream side in 1974.

The bridge is built of coursed squared near ashlar red sandstone, with dressed freestone to the arches and an attached steel and concrete footbridge. Three elliptical arches with projecting cutwaters on both faces. The downstream face is unaltered and has a small strip pilaster on either side of the central arch. The upstream face has the cutwaters built up to support the footbridge which is otherwise clear of the main bridge. The parapets of the main bridge are slightly recessed and are stone coped. The footbridge has steel girders and plain railings.

Included as a turnpike bridge of 1806-12, built by David Edwards and possibly designed by William Jessop. It has survived altered only by the footbridge attached in 1974.