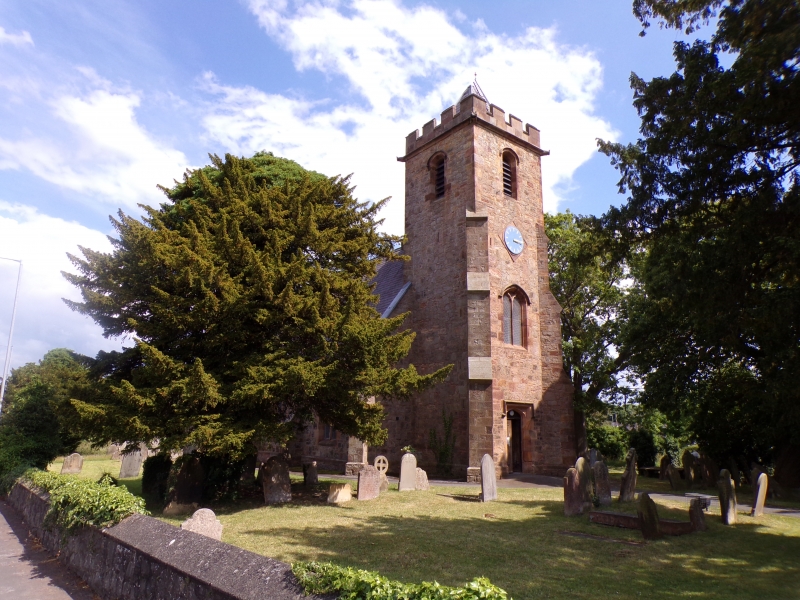 Location: In the angle between Church Road and Chester Road (A5104), to the E of a large roundabout. Set in a large rectangular churchyard retaining some original boundary walling, the NW wall replaced when the

The Hon. George Neville, Master of Magdalene College, Cambridge, was appointed Rector of Hawarden in 1813, by his brother in law, Sir Stephen Glynne of Hawarden Castle. In 1824, Rector Neville raised a subscription fund to build a church between Broughton and Bretton, donating £100 himself and with a grant from the Church Building and Enlargement Society. The architect was John Oates of Halifax, who had designed other Commissioners' churches, including the neighbouring Buckley Church. Rector Neville and his nephew, Henry Glynne, were collectors of medieval woodwork, some of which was incorporated into the fixtures and fittings of the church. It has been suggested that part of the woodwork may have come from the marital bed of Henry VII, who in 1486 married a member of the Neville family, from whom Rector Neville was descended.

In 1876 a new chancel was built, replacing the original sacrarium, by Kelly and Edwards, architects, of Chester. It was a gift of William Johnson of Broughton Hall, then Mayor of Chester. The glass of the earlier E window (from 1851 and dedicated to Lavinia Glynne) was reinserted in 1876 with some additions, but was replaced again in 1916.

Later chancel of snecked sandstone ashlar with gabled transepts housing vestry to S and organ chamber to N. Perpendicular-style 2- or 3-light windows, the lights with cinquefoiled heads; diagonal buttresses; raised stone copings with kneelers; moulded eaves cornice and sill band. E window of chancel is 3-light, the hoodmould with end stops bearing the heads of Queen Victoria and the late Prince Albert; 2-light windows to N & S sides of sanctuary. Gable ends of transepts have 3-light windows, that to S has segmental head with square hoodmould; R return of S transept has pointed-arched doorway leading into vestry. The N window has end stops bearing the heads of Mr and Mrs Johnson.

Simple Georgian nave with steeply pitched roof of 5-and-a-half bays with collar trusses on decorative wooden corbels. Pews with plain bench ends, doorways with Tudor-arched heads. West gallery with wooden front, supported on 4 posts, said to be from a late C15 tester bed. A detailed analysis by Timbrell of the badges, coats of arms and decoration on the posts, suggested they were from the marital bed of Henry VII. The gallery front bears further pieces of ornamental woodwork, including a depiction of St Anne, Virgin & Child, thought to be of German medieval origin, and a pair of griffins, probably from the same source. A central coat of arms is Hanoverian, pre-dating 1801; this is flanked by panels referring to Rector Neville and the construction of the church in 1824. To the R of the chancel arch is the ornamental panelled vestry door, the woodwork thought to have come from the same bed as the gallery posts, possibly the tester or bedstead. Heavily decorated octagonal wooden pulpit to SW of nave, the top moulding thought to be a cornice from the bed, the rest from other sources including Jacobean panelling to the base. Underneath the chancel arch is an early medieval stone piscina, currently used as the font (the C19 font at the W end, with incised quatrefoils, is not in use).

Large wall monument to S side of chancel, of red sandstone with cinquefoiled ogee head bearing the arms of the City of Chester: it is a memorial to William Johnson who erected the chancel in 1876. World War II memorial to N side of nave. Stained glass: N and S chancel windows by Kempe, showing Annunciation and the Flight into Egypt. The E window was replaced in 1916 and is by Powell & Sons, but retains the original dedication to Lavinia Glynne of Hawarden Castle.

Listed grade II* for the exceptional medieval woodwork which is built into the fixtures and fittings of this simple late Georgian commissioner's church, a highly unusual combination.