A Grade II Listed Building in Llangan, Vale of Glamorgan 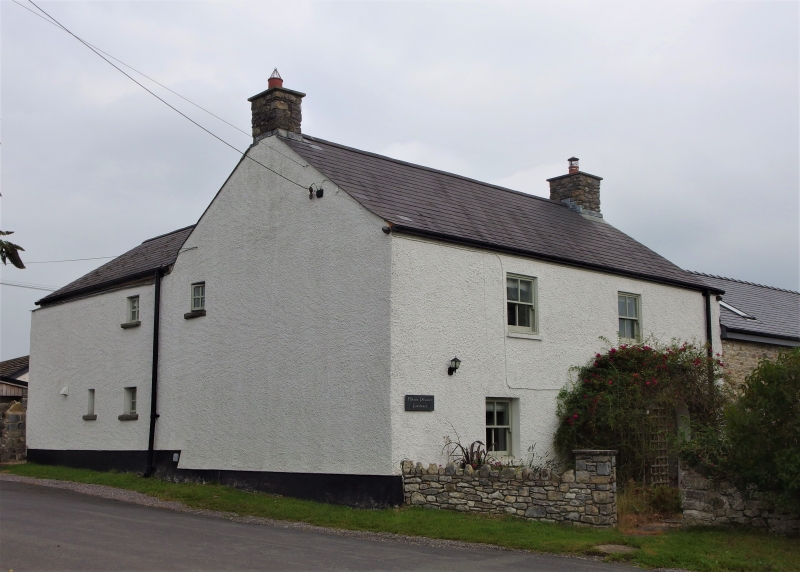 Location: Prominently sited at the southern entry to Llangan village.

This is a late C16 two cell house which was heightened in c1800 to a full two storeys. There is no suggestion that this was a ''longhouse'' so its current suggestive appearance must be the result of the c1800 rebuild (see References). The barn appears to be a mixed purpose building with a threshing floor, cowhouse, stable and hayloft over. The storeying may be a C19 conversion of the earlier cowhouse, and the barn may also have been lengthened at this period. The house has a probably C19 outshut across the rear and what may well be a wholly C20 rear wing, although a smaller wing is shown on the Tithe map.

Built of local limestone rubble, rough rendered to the house and painted to the barn, slate roof to the house, corrugated steel sheeting to the barn. Two storey house with a barn in-line, also two storeys, but with a lower roofline. The house has a large projecting rear wing and a smaller outshut.
The main elevation of the house has a window on either side of a late C20 gabled porch; two more windows above but these are set more closely together, 2 over 2 pane sashes. Fairly low pitch roof with rubble gable stacks.
The gable end of the house has only a small window on the first floor, the wing has two more small windows below and one above, a small paned casement on each floor in the wing gable. Casement windows to the rear of the house.
The barn has first a C16 hollow chamfered pointed arch doorway, then the rest of the building is walled off into the yard. The yard elevation has first a tall doorway, then a door to the cowshed, then a hayloft door then a small window to the stable, then above a window to the hayloft and finally the stable door. The barn roof is more steeply pitched than the house roof.

Interior not available at resurvey. RCAHMW reports that this was originally a hearth passage house with hall, inner and outer room and cross-corner stone stairs. This is via the Tudor doorway which no longer enters the house. The house now has a central doorway in the standard Georgian fashion.

Included as a C16 farmhouse which, despite later alteration, has retained its character at the entry to Langan village.