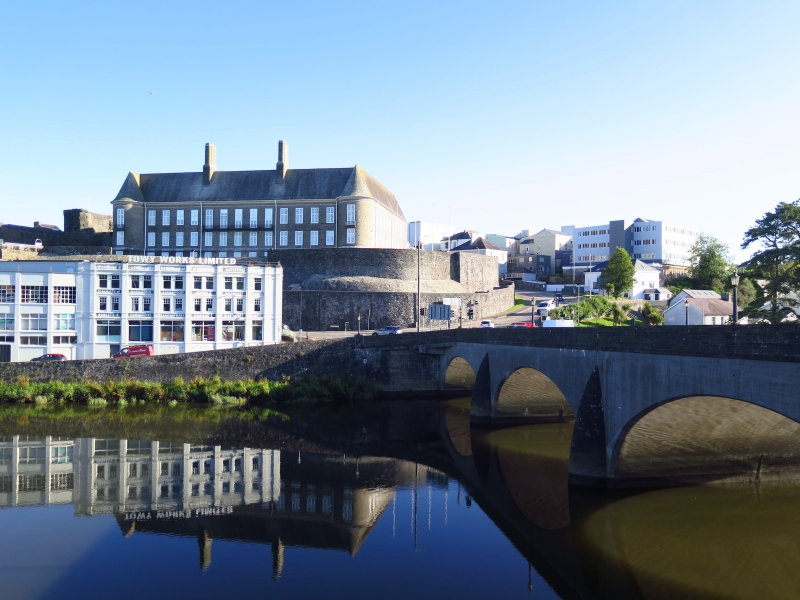 Road bridge of 1936-7 over the Towy, at the first crossable point. Also known as the Town Bridge and Carmarthen Bridge. The previous bridge was of stone, of 7 arches, first recorded in 1233, repeatedly repaired, and widened in 1777 and 1834, and demolished in 1936. The present ferro-concrete bridge was designed by Sir Clough Williams-Ellis in 1933, and was built by Messrs. Holloways, contractors, at a cost of £89,091. Work began in May 1936, it was opened to traffic in September 1937 and officially opened by Leslie Burgin, Minister of Transport, 4/4/1938. A blueprint in Carmarthen museum is marked Considere Construction Ltd, Westminster.

Road bridge, 3 broad elliptical arches in reinforced concrete, with sheer parabolic-curved cutwaters in cut grey sandstone. Parapets also in cut sandstone ashlar in alternate broad and narrow bands, with iron octagonal lampstands in modern Georgian style. Parapets curve outward to N and continue some distance to S (in Llangunnor Community), the E parapet over plain concrete railway bridge, the W parapet curves down station approach. On E parapet is inscription in Welsh and English recording the rebuilding and opening, each side of bronze relief plaque of old bridge, by H. Tyson Smith.

Included as an earlier C20 concrete road bridge of considerable scale, by a leading Welsh architect.