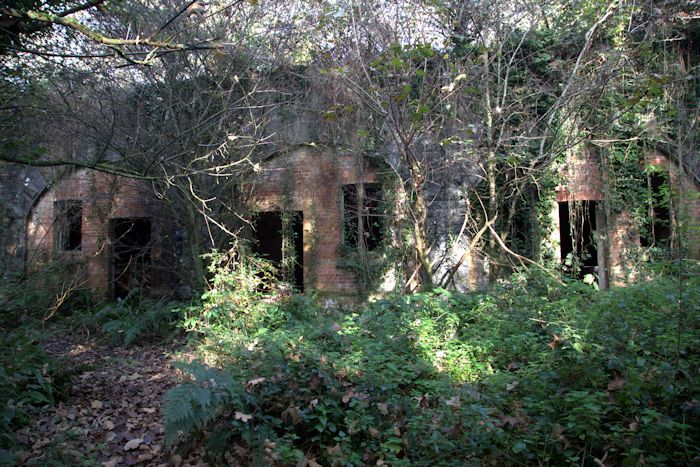 Location: Some 600m NW of Little Honeyborough and approximately 1km NE of Waterston.

Large artillery fort of 1861-68 part of the N line of defences for Pembroke Dockyard, intended to include a chain of land forts from Newton Noyes to Burton Mountain, of which only this one was built, sited on a low hill with views across the countryside. The enormous cost of £45,462 reflects the massive nature of the earthworks, largely overgrown now and hard to distinguish.
The second generation of forts comprised also the fort at Tenby and the inner Haven ring, Forts Popton, South Hook, Hubberstone and Chapel Bay, with the remodelled Stack Rock island fort. The plans for this line were drawn up by W. D. Jervois, assistant Inspector General of Fortifications, the principles set out in his 1860 'Observations relating to the works in progress and proposed for the defence of the naval ports, arsenals and dockyards' which followed the report of the Committee on the sea defences of Milford Haven 1858 and influenced the Royal Commission on the Defences of the United Kingdom report of 1860. Construction was by Messrs James & John of Pembroke Dock.

The fort, similar to Crownhill at Plymouth, is a very large hexagon with sides of 120m, surrounded by a dry moat some 8m deep and 11m wide, the escarp walls stone-revetted, the counter-scarp natural rock. A single entry on the S was approached by a serpentine road to a wooden bridge (now earth causeway), the entry a stone archway into a tunnel through a massive earth bank. The moat was covered by one double and four single two-storey caponnieres each with 4 gun embrasures and musketry loopholes.
The fort was designed to have 32 guns sited on the ramparts served by 12 expense magazines set into the traverses, each gun position protected from behind by earth. There was also an earth bank across the centre of the parade ground. Accommodation for a garrison of 128 men was in the five caponnieres and 12 barrel-vaulted bomb-proof casemates, designed as a series of limestone vaults fronted in brick with windows and doors on the S front (similar to barracks at Fort Hubberstone). The magazine was under the NW rampart, 2 barrel vaulted underground chambers served by a lighting and ventilation passageway that surround it.

The fort is currently inaccessible as the iron tunnel gate is barred.

Included as the only C19 land fort built in Wales as part of the defences against the French threat perceived to come from the ambitions of Napoleon III.
Scheduled Ancient Monument: PE339(PEM)