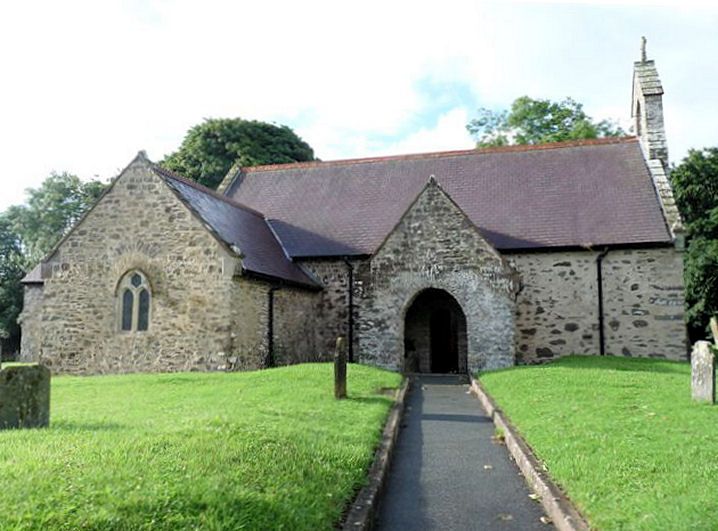 Location: In churchyard towards S end of village, backing onto ancient fort.

Anglican parish church of C12 origins, heavily restored. Rosemarket was a Norman settlement and the church is referred to in the C12 when given to the Knights Hospitaller of Slebech. Described as ruinous in 1640, in 1674 Sir John Stepney was ordered to repair the chancel, the work completed before the 1683 visitation. Sir S Glynne in 1856 described the N porch as of rude construction, the arch deformed, the inner N door arch as ill-shaped and obtuse and the transept arch rude and obtuse. The belfry was a shallow oblong tower with 2 openings (like St Ishmaels) and the W window overgrown. The chancel arch was low, rude and obtuse and the windows mostly wretched except the C15 N transept N window (which oddly he calls square-headed). There were rood steps on the N of the chancel arch and stone benches within the chancel.
Restoration was initiated after Sylvanus Brigstocke became the first resident vicar for many years, in 1856. A ground plan of 1856 shows no N transept E window, the squint walled at the chancel end, box pews, and 3-decker pulpit on S side. Nave restored 1859 by R K Penson for £545 with heavy ashlar copings and some plain plate-traceried S windows, and in 1868 E H Lingen Barker rebuilt the bellcote which was formerly flat-topped like that at Hasguard. In 1889-91 T P Reynolds reroofed the chancel and transept, rebuilt the chancel arch and added fittings. He found the 2 openings flanking the chancel arch (perhaps originally like those at Johnston) but replaced them as plain rectangles. His work cost £300. In the 1859 restoration a carved grave slab to Jordan Walter of the late C14 was found, now lost.