RC Church of Our Lady of Seven Sorrows 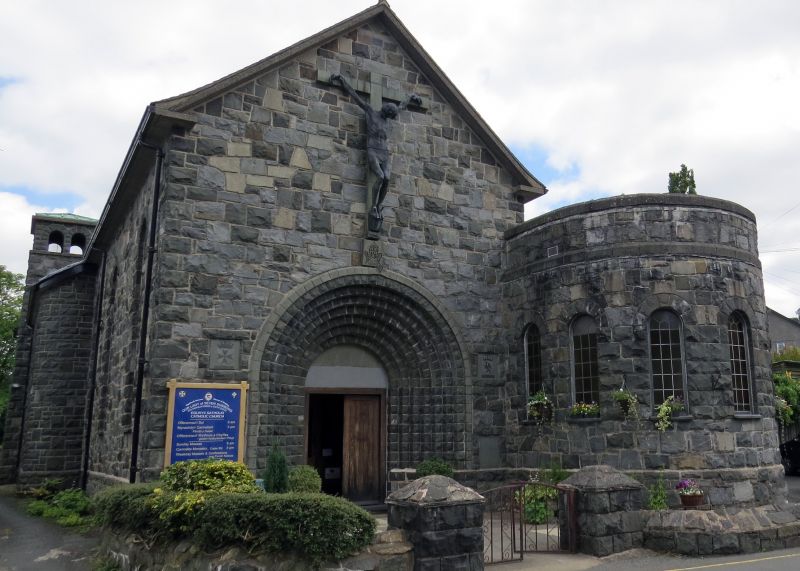 Entry Name: RC Church of Our Lady of Seven Sorrows

Location: To S of the main square, with apse backing onto river.

1963-1966, architect Maurice Pritchard, builders John Evans and Sons. In 1928, Fr Francis Scalpell (1895-1970), a priest from Malta came to Dolgellau, the first Catholic priest since the Reformation. Initially services were held in a stable which was later extended into a fish and chip shop with the help of Italian prisoners of war. Fr Francis is said to have written over 25,000 letters to raise funds for a new church. In the early 1960s an anonymous donor provided sufficient funds to begin the present church specifying that it must harmonise with Dolgellau and its mountainous setting. Work began in 1963, and the church was consecrated on Whit Monday 1970. The total costs were £68,000. The west doorway is said to be based on Cormac''s chapel on the Rock of Cashel off Ireland''s south-west coast. The crucifix above the doorway is by a Milanese sculptor, Giannino Castiglione (who executed bronze doors for the front of Milan Cathedral in 1950, and is said to have worked at St Peter''s, Rome). The church is built in local stone, with altars incorporating stones from the Holy Land.

Church of rock-faced grey stone; slate roof. Romanesque style. Deep round-arched doorway flanked by heraldic panels representing Wales and Malta; a third panel representing the papacy, and a large crucifix over door.
To the R of the doorway, two apsidal chapels at right angles to each other (Baptistery and Lady Chapel). The L elevation has three tall round-headed windows, then projecting bay with doorway and window over. Square bell turret with paired openings at bell stage and low pyramidal roof; tall round-headed window. To rear, beyond apse, is rendered end of vestry. Right hand elevation has lunette windows. At the rear of the right hand side of the church, at right angles, is Presbytery, a two-storey two-window house, rendered, with hipped slate roof.

Nave has roof of open trusses with king-posts with raking struts; floor of quarry tiles.
Apsidal sanctuary with 5 stained glass windows of Evangelists and Holy Spirit. Italian brass screens and gates to either side of sanctuary, baldachino above altar, and bronze crown of thorns to altar frontal are all significant elements of original design.
Right aisle of 4 round-arched bays plus chapel at sanctuary end (Chapel of the Most Precious Blood under lower arch and with doorway to vestry). The aisle is lit by lunette windows, one with stained glass. The round piers of the aisle arcade are pierced with squints to give view of altar. At W end of aisle is apsidal Lady Chapel, and then at right angles, apsidal Baptistery with seven windows symbolising the Seven gifts of the Spirit. The L side of nave has, at sanctuary end, an arched recess with confessional and tall window (under the bell turret); then two arches to recessed area. Nave then narrows and is lit by tall round-headed windows.

Listed as a remarkable expression of the revival of Roman Catholicism in North Wales in the post-war period. The building successfully introduces elements of modernity into a broadly traditional layout, in a rugged style apt for its setting.