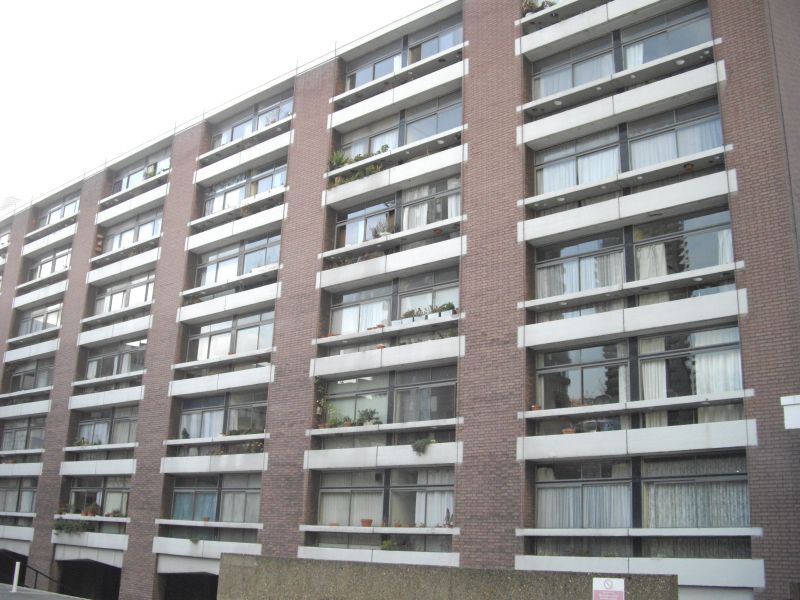 II
Block of 72 flats. Part of the Golden Lane estate, design won in competition in 1952; this block designed in 1955 and built 1958-61. Original competition won by Geoffry Powell, estate developed by Chamberlin, Powell and Bon. Ove Arup and Partners engineers.

Reinforced concrete floor slabs. Brick piers, arched over basement, with concrete access decks and red cladding panels under windows. Flat roof. Six storeys over open basement, containing residents' stores, reached via steps down from entrance court and leading to tennis courts (originally bowling green) and recreation centre. Beneath the block also is a car park, which extends under the walkway in front of the block. Four circular ventilation shafts are strong features of the composition. All flats are bedsits, arranged in pairs reached via staircases at each end and lift at west end (shared with Crescent House). Aluminium windows. Timber doors reached via access galleries on north side with openwork concrete balustrading. Interiors not of special interest.

HISTORY: The development of the Golden Lane Estate is explained in the entry for Great Arthur House.

REASONS FOR DESIGNATION: Cullum Welch House, part of the Golden Lane Estate, is designated at Grade II for the following principal reasons:
* Architectural interest: as a self-sufficient 'urban village', in which every element of space is accounted for and every detail carefully considered, the Golden Lane Estate has claim to be the most successful of England's housing developments from the early 1950s.
* Planning interest: the estate reflects the formality, mixed with picturesque attention to landscape, which was emerging in British architecture in the early 1950s, this saw the spaces between the buildings being almost as important as the buildings themselves. The strong formality of the estate became a key characteristic of the work of Chamberlin, Powell and Bon, as did the provision of a wide range of facilities on the site other than just housing. These are features that can also be seen at their Barbican development.