Bastion or garden feature, including ramps 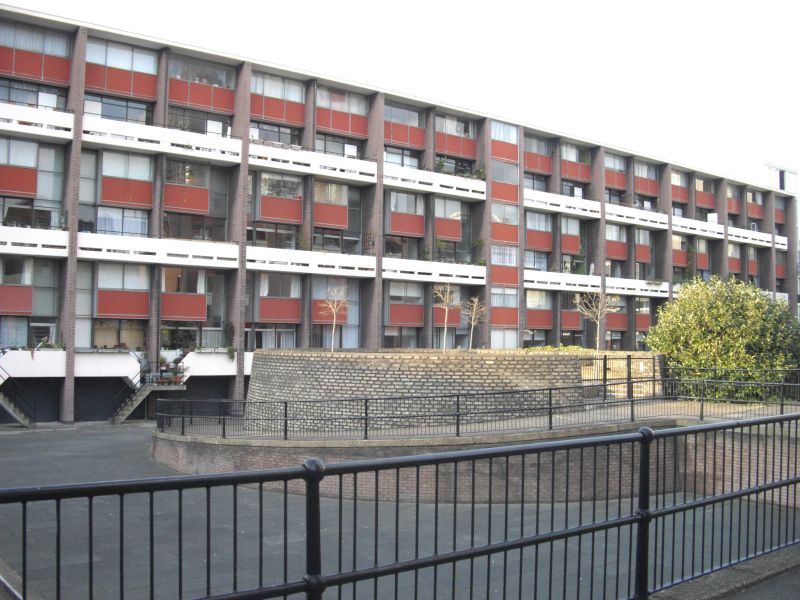 GOLDEN LANE (west side)
Bastion or garden feature, including ramps

GV
II
Rondpoint or garden feature. Part of original design won in competition 1952; built 1956-57. Winning competition design by Geoffry Powell, design developed and built by Chamberlin, Powell and Bon. Reinforced concrete clad in granite blocks. Circular bastion with continuous seat on each side, paved in granite setts and reached via steps, and with curved ramp on one side, which has steel balustrade.

SPECIAL INTEREST
The bastion was in the original design, and enclosed the strong north-south axis of the competition layout, which survives though it is not emphasised in the version as built. It, the steps and ramp, also highlight the changes in levels within the scheme. Its greatest significance, however, is as the principal circular element within the formal grid of rectangular blocks, gardens and terraces at Golden Lane. Out of the featureless landscape of derelict, bombed warehouses with deep basements, Chamberlin, Powell and Bon developed their interest in three-dimensional planning to achieve a particularly interesting, urban pattern, a mixture of picturesque planning laced with the formal geometry which was becoming a powerful force in the early 1950s. Though the most conscious landscape feature of the estate, there is nothing left to chance of nature in the bastion either.