Recreation centre and tenants' hall, including baths, gymnasium and nursery 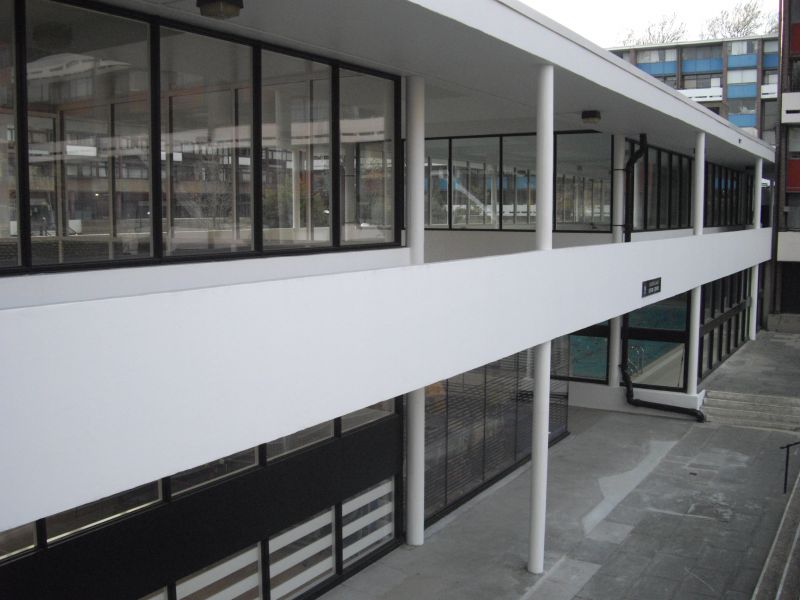 GV
II
Recreation centre, including baths and badminton court or gymnasium, with nursery and tenants' hall. Part of the Golden Lane competition design won in 1951, built 1958-62. The competition was won by Geoffry Powell and developed by Chamberlin, Powell and Bon. Ove Arup and Partners, engineers.

Reinforced concrete tenants hall, with steel-framed pool and court, the former with brick and the latter with large areas of glass. Flat asphalt roof. 'L'-shaped plan set in basement level with tenants' hall of one storey. This has grey brick piers and reinforced concrete bush-hammered arches on top, forming arcade pattern, with rooftop children's playground on top, and nursery of grey brick on ground floor over entrance to recreation centre at junction of wings. Two-storey pool hall and badminton court separated on both levels by walks through the building, both with walkways also on either side at upper (ground) level. These of concrete supported on painted posts or pilot is with painted roofs. The tenants' hall glazed between brick piers, with timber windows. Concrete roof elaborately laid out as children's playground, with long bench, walls, and sunken circular playground reached either by slide or gate set below at level of Hatfield House gardens. Swimming pool fully glazed on three sides with metal glazing; these sides all with concrete walkways. The gymnasium and badminton court similarly treated, though most of the glass is now opaque, with timber floor.

SPECIFIC INTEREST
The recreation centre is a distinctive element in the design of the Golden Lane. It physically divides the original part of the estate from the later blocks to the north-west, and in style too it falls between Chamberlin, Powell and Bon's early and late styles. In the tenants' hall there is a strong element of the round-arched bush-hammered concrete idiom seen at Crescent House and which was to be developed further at Barbican. The use of different levels is a key element in Chamberlin, Powell and Bon's work, first seen at Golden Lane where it was a natural way of using the deep basements left by the previous buildings on the site and in response to the City's dictates in its competition brief of 1951. The result is a formal grid of courtyards and buildings, in which the circular children's playground is an exception, but one that is none the less formal for that. Every available inch of space has been ordered geometrically for a purpose.

Above all the recreation centre is the chief example at Golden Lane of Chamberlin, Powell and Bon's belief that a housing development should be more than a collection of flats but a real part of the city; it provides welcome facilities for those who live outside the estate as well as for residents. Again, it anticipated the introduction of added facilities (there for the arts) at Barbican.