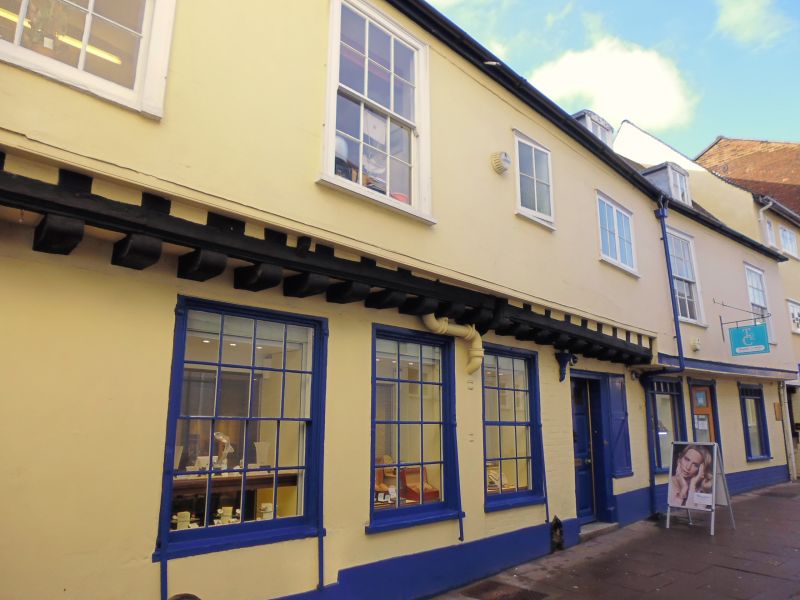 Includes: No.15 HIGH BAXTER STREET.
Shop and offices on a corner site, formerly shop and house
with workshops behind. C16 and C17 with an early C19 front to
Abbeygate Street. Timber-framed, with the timbers exposed in
one bay of the jettied side frontage, the remainder rendered.
Hipped plaintiled roof.
EXTERIOR: 2 storeys, attics and cellar; on a corner site with
a return front to High Baxter Street. The Abbeygate Street
frontage has a plain parapet and quadrant corner. 2 windows to
the upper storey: one small-paned sash in a plain reveal on
the curve of the corner and one 3-light small-paned sash with
diminished side-lights and a wooden blind box. A lead-covered
segmental-headed dormer with a 2-light casement window in the
front slope of the roof. An early C20 shop front with a heavy
fascia and corner entrance door also extends along part of the
side range. This 5-bay range along High Baxter Street is in 3
sections with marked joins in the framing after the 2nd and
3rd bays. At the south end one bay has exposed studding on the
upper storey; in the next 2 bays the joist ends and the
ogee-moulded bressumer are visible; the 2 bays to the north
are unjettied, with a rendered and lined exterior restored in
1990.
There is a variety of windows along the upper storey: 4
small-paned C19 sashes in moulded frames, one single-light and
one 2-light C20 casement window, and on the corner a blocked
4-light original window with moulded mullions and C20
replacement spandrels. On the ground storey three 12-pane sash
windows, one with panelled external shutters, and a 6-panel
door with raised fielded panels, the top 2 glazed. Adjoining
to the north is a further 3-storey range, also completely
restored in 1990. This has a continuous row of fixed casements
on the 1st storey and 3 casement windows on the top storey, 2
of 2 lights, one single light. C20 plaintiles. A small stable
timepiece is attached to the 1st floor of the Northgate Street
frontage: made by W Potts & Sons, Leeds, dated 1900, with
double bracket "frying-pan" dial.
INTERIOR: cellar with walls of flint rubble and re-used stone
blocks has the remains of old render and a timber ceiling.
Along the side range some plain widely-spaced studding and
chamfered joists are exposed, and in the 2 end bays on the
north the main cross-beams and plain unchamfered joists of the
ground storey ceiling are visible. Original roof to part with
clasped purlins, collars and principal rafters exposed.