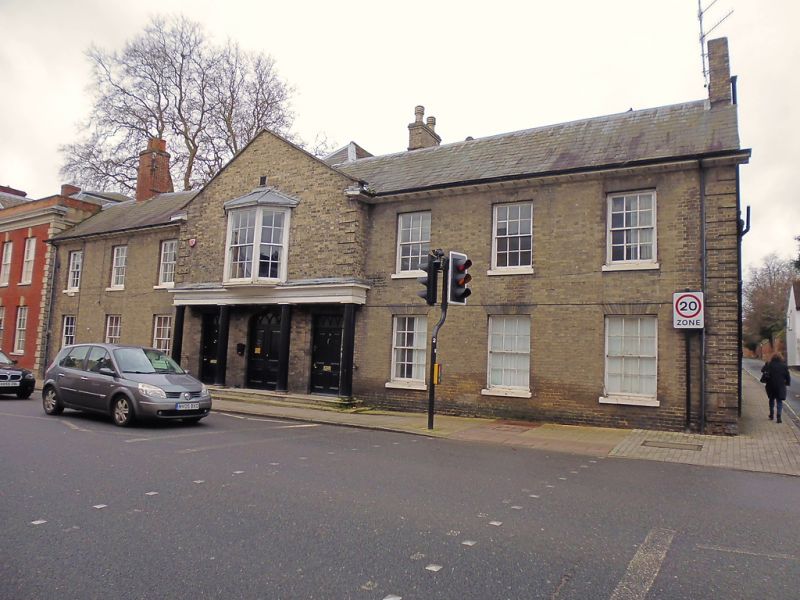 House, now divided into 3. C14 and C15, with C17 and C18
alterations and extensions; divided into 2 and refronted in
1823. Part timber-framed; part flint-walled; red brick to C18
changes; fronted in white brick. Slate roofs.
EXTERIOR: 2 storeys; cellars to part. The long street frontage
is treated as a single unit. A central gable with rusticated
brick quoins projects over a shallow tetrastyle Doric portico
on a stone stylobate; the 2 flanking ranges have wide
modillion eaves soffits. 7 windows, arranged 3:1:3. The 2
sides each have 12-pane sashes in plain reveals with flat
gauged arches; the central gable has a large canted 3-light
oriel bay with a 12-pane sash window and 2 narrower 8-pane
sashes. Three 4-panel entrance doors within the portico have
raised fielded panels: the 2 outer doors have rectangular
fanlights with arched Gothic tracery; the middle door (to
No.10) has 2 leaves and the fanlight, also in Gothic style, is
ogee-headed.
The C17 rear range of No.9 has twin rendered gables: original
bargeboards have dentils and guilloche ornament. An C18
half-glazed rear door with heavy glazing bars has an eared
architrave to the doorcase and a flat cornice hood on
brackets. The long rear range of No.10 has exposed flint
walling along part of the north side and a section of red
brick with blue headers; C18 red brick replacement on the
south side.
No.11 has a long tiled rear range down Pump Lane: part
single-storey, part raised to 2 storeys with brick on the
ground storey and render above. One Edwardian
mullion-and-transom 2-light upper window on the main rear wall
has cusped heads to the lights.
INTERIOR: complex, overlapping between Nos 9 and 10 on both
storeys. The C14 front range of No.9 is the oldest part of the
building: 3 storied bays survive, initially associated with an
open hall, replaced in the later C14 when the rear range of
No.10 was built. Little framing is exposed within No.9, but
part of the smoke-blackened upper framing of the south end
wall of its former hall is exposed in the room above the
entrance porch, which is now part of No.10. Between the
entrance hall of No.9 and the adjoining plainly panelled room
is a thick flint and stone wall and at the rear of the

entrance hall is a stone porch which formerly led into the
cross-entry of the later open hall which now forms part of
No.10.
3 doorways in the porch have shallow pointed arches; over it
is a timber ceiling with very heavy plain joists and the small
room above has square Jacobean panelling topped by a fine
ornate C17 plaster frieze. A C17 dog-leg stair in the rear
range has pierced splat balusters. Crown-post roof to the C14
front range. A corridor from the front leads to the later C14
3-bay rear hall, now the principal part of No.10 and still
open to tie-beam level.
The south wall was realigned in the C18 and rebuilt in brick.
At the west end an inserted C16 fireplace has a 4-centred arch
and a variety of carved decoration, partly Jacobean, partly
reproduction in early C16 style. The walls have various
sections of square Jacobean panelling. At the east end, an
open Jacobean screen surmounted by a gallery marks the
position of the original cross-entry which linked with the
stone porch, now part of No.9. Against the north wall are 2
flights of late C17 stairs, extensively restored, with pierced
splat balusters, ornate lantern newels and moulded handrails,
one flight leading to the gallery, the other to the rest of
No.10 which is on a higher level.
The tie-beams and cornice of the hall are moulded, with deep
hollows, filleted rolls and brattishing. Crown-post roof, with
housings in the centre for a louvre to draw off the smoke of
the open hearth. To the west of the hall is a parlour, now
with complete Jacobean panelling, some reproduction, and below
it a 2-bay cellar with heavy unchamfered joists and a
chamfered main beam with broach stops. Further west, 2 bays
were extensively remodelled and raised in the C18.
The ground storey ceilings are very high with tall sash
windows on the south; a panelled dado and wood modillion
cornice to the walls; fireplace with eared architrave. In the
attics, and on the upper storey of the raised section, the
remains of crown-post roofs are visible and also the
timber-framed gable-end walls of the open hall, with multiple
bracing.
The whole rear range beyond the open hall has been widened
along the north side and contains corridors and an Edwardian
stair in Jacobean style. The upper framing along the original
north wall is now exposed inside the building. The front range
of No.11, formerly The Swan Inn, is apparently a rebuilding of
the early C19 with no visible earlier features: moulded
plaster cornices and 6-panel doors; a winder stair with stick
balusters and wreathed handrail. A long C18 rear range down
Pump Lane, part originally single-storey, has main beams
exposed.