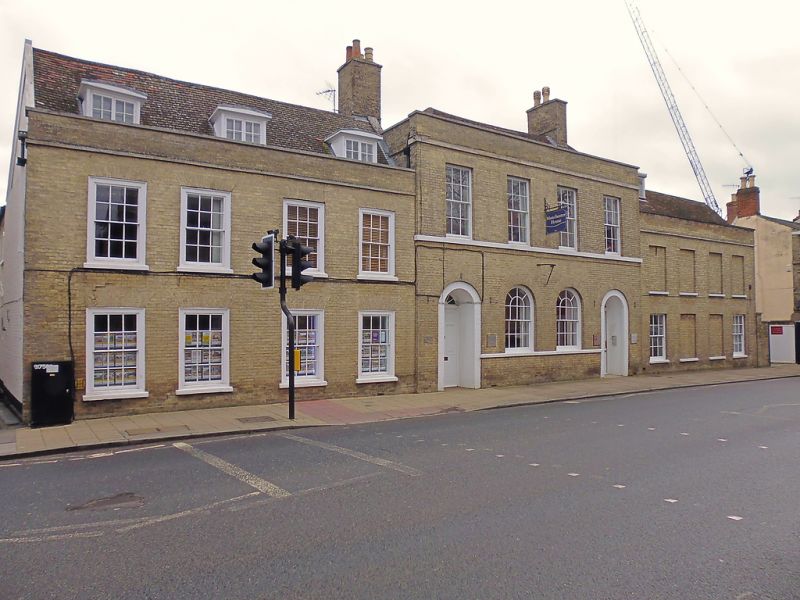 House, later divided into 2; now offices. Early C19 front;
early C17 core to part. Faced in white brick with a parapet
and a raised stucco band. Plaintiled roofs, the central
section fully hipped.
EXTERIOR: 2 storeys, attics and cellars. 12 window range,
arranged 4:4:4, with the centre, which breaks forward
slightly, higher at parapet and upper window level than the 2
sides. All 1st storey windows are 12-pane sashes, the centre 4
in plain reveals, the northern 4 in flush cased frames and the
southern 4 blocked: all have flat gauged arches. A stucco band
runs at ground and 1st storey sill level in the central block.
On the ground storey of the central block are 2 small-paned
semicircular-arched windows flanked by 2 semicircular-arched
doorways with deep stuccoed reveals and 6-panel doors. The
ground storey of the south end has two 12-pane sash windows in
flush cased frames and 2 blanks. On the north, 3
segmental-headed dormers with 2-light small-paned casement
windows; on the south, one flat-headed C20 dormer.
INTERIOR: C19 brick-lined cellar with wine bins. The north end
of the building encases 2 long bays of early C17
timber-framing: on the ground storey, main beams with
ovolo-moulding; on the 1st storey, several 4-panel doors with
bolection moulded panels and original H-L hinges; one room
with full bolection moulded panelling and a good early C18
fireplace with enriched eared architrave.
A rear wing is also basically C17: a 3-light small-paned
sliding sash window in the apex of the gable. The central
section of the house has later C18 features: a large upper
room which runs from front to back has a rounded rear bay with
3 long 12-pane sash windows and a fireplace surround in Adam
style. Some sash windows have panelled internal shutters with
applied mouldings.
Early C19 features have been superimposed on the earlier
fabric: the main geometrical stair has stick balusters,
panelled square newels, curved handrails and a balustraded

landing. The back stairs, partly straightened in the later
C20, are similar in form.
From c1790 to his death in 1831 the house was occupied by Sir
Thomas Gery Cullum and his wife Lady Mary Cullum.