A Grade I Listed Building in Linstead Parva, Suffolk 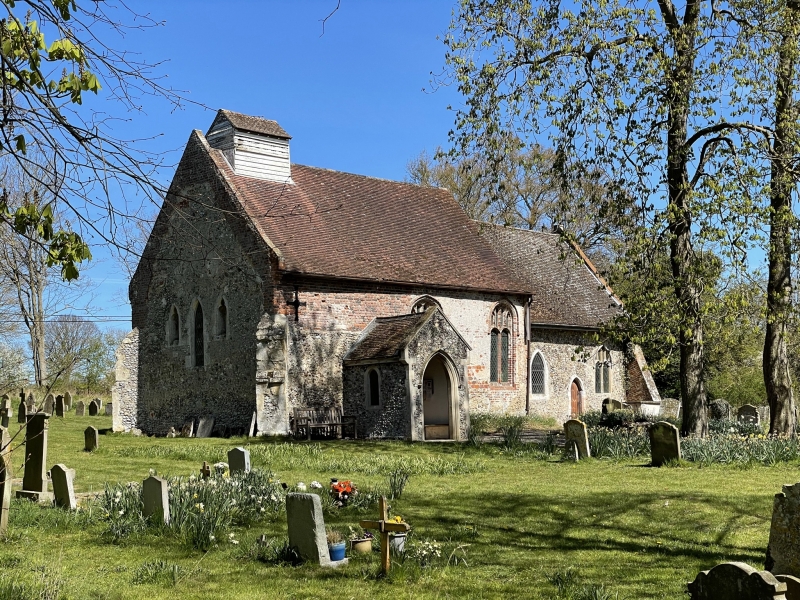 Parish church. Medieval, restored 1891 and 1894. Nave, chancel, south porch
and north vestry. Flint and stone rubble, with remains of old plasterwork;
stone dressings; plaintiled roofs. C13 nave, partly rebuilt and heightened
early C16 in red brick. At the west end is a lancet window with flanking
trefoil-headed statue niches, now empty. Early C16 2-light brick windows, 2
to the south and one to the north. C13 south doorway. Porch added 1894. At
the west end of the nave roof is a weatherboarded bell turret. C13 chancel:
to the south there is a broad lancet window, an original Priest's doorway and
a 2-light C15 window; good original 2-light east window with Y tracery,
shafted internally; one narrow C13 lancet window to the north. C15 arched-
braced nave roof of 5 bays with moulded and crenellated wallplate and bracing
between the wallposts. The rood beam is still in position, with stud and
plasterwork above. The chancel roof is plastered over. C15 carved octagonal
font with 4 lions against the stem. Good set of 18 poppyhead bench ends in
nave, 2 with carved armrests: some are said to have come from the now-
demolished Linstead Magna church. Simple pointed-arch piscina in south
sanctuary. Graded I for intact medieval fabric.