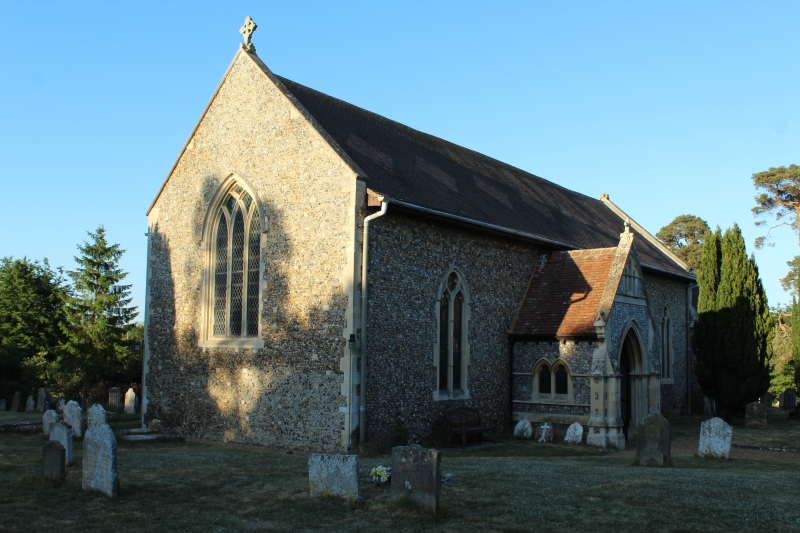 Church. C13-15, damaged by fire in 1616. Former north-eastern tower fell in 1642. Restored 1854-60 by Morgan and Phippson and further restored in 1868 by Edward Low. Porch added 1877. Rubble flint, rendered flint rubble and knapped flint with ashlar dressings and a roof of plain tiles. Nave,
chancel, south western porch. Nave: south face: walls refaced c.1854-60. Gabled porch to left of centre with knapped flint walling.
Diagonal buttresses to the corners with offsets and gablets. Central
archway with keeled colonettes and hoodmould. To the gable which has an
ashlar coping, is a band with square flower ornament. Blank triple niche
above this. To right is a 2-light Curvilinear window with ogee-headed
lights and dagger to the apex, partially reworked in the C19 but retaining
material from an earlier window. At right of this are two C19 windows
which copy its pattern. Buttress with 2 offsets to far right. North face:
rendered. Four buttresses, each with 2 offsets with some C18 or early C19
rebuilding in brick. Two-light Y-tracery window of c.1310 to left of
centre with double-chamfered surround. Doorway to right of centre now
mostly obscured by later boiler house. Only the hoodmould still showing
through the render. Quatrefoil light to rood stair at far left. West
face: central window of 3 lights with interlacing tracery, the wall having
randomly set blocks of freestone. Chancel: South face: priest's doorway
slightly to left of centre. Early-Perpendicular window to left of this and
to right of this a Y-tracery 2-light window, both being of C19 date but
possibly copying the forms of earlier models. North face: rendered through
which shows considerable quantities of rebuilding in brick of C17 or C18
date. Y-tracery window to right with hollow chamfered surround. East
face: diagonal buttresses with 2 offsets and dying back into the corners.
Central C19 three-light curvilinear window with ogee heads and mouchettes
and daggers to apex forming a 5-petalled flower.

Interior: Nave: panelled plaster ceiling with moulded pine ribs and square
floral bosses at the intersections. It appears to incorporate material
from the earlier church, including arched braces. Rood loft staircase with
two openings, the lower one having a 4-centered arch with ashlar surround.
Font, early-C15, ashlar, octagonal, raised on one step. Octagonal shaft
around which are 8 mutilated figures in clerical habits which Cautley
associates with the serving of mass. The corbel course has heads of a
cardinal, bishop, monk and neophyte and 4 orders of nuns (Cautley) set
between which are a chalice, patten, censer, ship, holy-water vat and
sprinkler. The slightly battered bowl has buttresses to the angles and
sunken panels containing representations of the four evangelists and four
other figures which Cautley conjecturally ascribes to the Virgin, Christ,
God and an angel. The whole is carved with verve and skill "quite an
exceptional piece" (Pevsner) Chancel: ceiling of 4 bays ashlar posts,
common rafters, collars and arched braces, much of the timber appearing to
be re-used. C19 stalls with front panels of C16 linenfold panelling.
SOURCES: Nikolaus Pevsner, The Building of England :Suffolk, 1975
H. Munro Cautley, Suffolk Churches, 1982