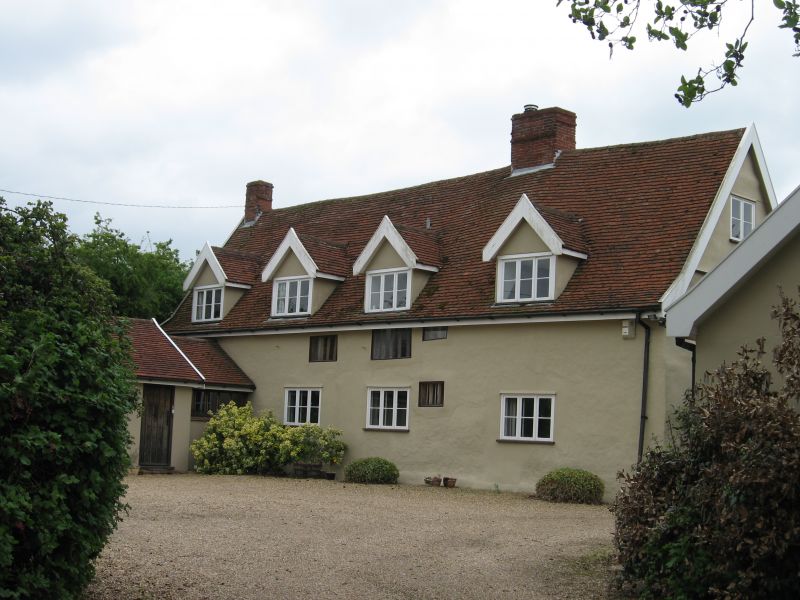 House. Second half of C14 with early C17 additions. Restored and extended to
rear 1972-73. Timber framed and plastered with a plaintiled roof. 2 storeys
and attic. The house comprises a former open hall of raised-aisle form
together with storied service and solar ends. Windows mainly mid C20
casements; some C16-C17 windows with diamond and ovolo-moulded mullions, and
the upper part of an original diamond-mullioned hall window at the rear. Mid
C20 door into service end. 4 gabled dormers in each roof slope. Modernised
interior with most of the structure exposed. Both original cross-passage
doorways survive, together with the paired doorways into the service rooms:
tall have 2-centred arches. Evidence for original screens between the cross-
passage and hall. The raised-aisle structure is substantially complete. The
queen-posts of the open truss are of cruciform section, the heavy arched
braces to the cambered tie beam meeting to form a 2-centre arch; square crown
post with pronounced double jowled head (an unusual feature) and 2-way bracing
to the collar purlin; arched side ties to the top plate (one concealed). The
roof is largely intact, all components being sooted. The open truss has
traces of the original red ochre decoration. Late C16 inserted floor with
chamfered joists, those at the lower end supported on an additional bridging
beam parallel with the original one which carries the open truss. Stack
inserted into solar, against upper end of hall. The solar end was extended by
one bay in early C17 and the attic floor supported on upper crucks.