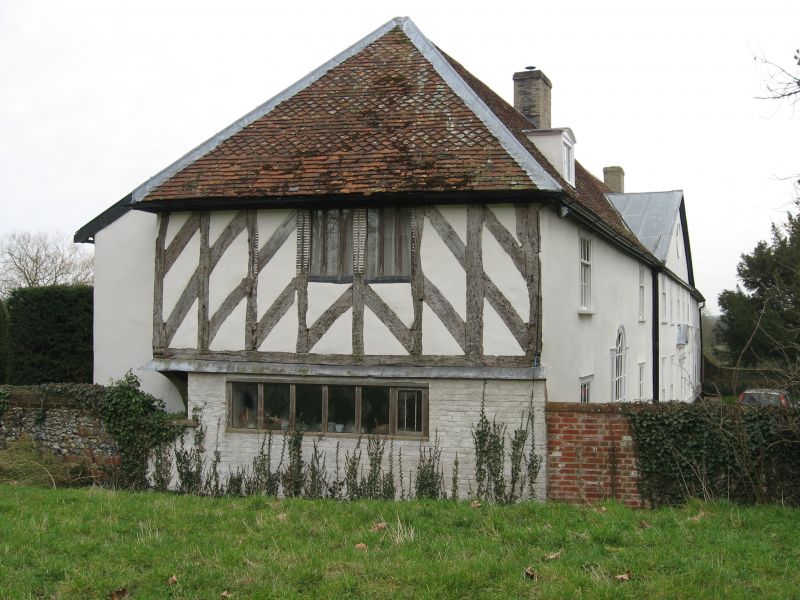 Former College of St. Andrew, founded by the will of Sir John de Wingfield in
1362, incorporating parts of the pre-existing manor house; later a farmhouse;
restored in 1970's and now private residence and Arts centre. A complex
structure with work of C14 onwards; partly rebuilt c.1600 and extensively
altered and re-faced late C18. Mainly timber framed and plastered with
plaintiled roofs; a hipped roof over the front range. 2 storeys and attic.
Long front range, not quite symmetrical; the centre section is set slightly
forward and pedimented, with a roundel in the tympanum. Moulded wooden eaves
cornice. 9 windows, 2:5:2, flush-frame sashes with glazing bars; the wings
have an additional ground floor opening in the form of a Venetian window. 7
of the windows are wholly or partly blind. Doorway with fluted Doric
pilasters set against a rusticated ground, entablature with triglyphs and
segmental pediment. Half-glazed entrance door. 2 segmental-headed dormers.
2 axial white brick stacks. To the rear, at right angles to the front range,
the mid C14 open hall of the former manor house, now restored and with the
inserted floors removed. Part of the lower hall bay and the service end to
the east have been lost but the upper gable end is original, with remains of 2
doorways to the solar end. The hall was originally aisled: the aisle posts of
the open truss are now supported on a C15 cambered and moulded tie beam, above
which are the massive arched braces to the original tie beam and an octagonal
moulded crown post with 4-way bracing. The side walls of the hall were
rebuilt in C15: some of the windows now restored. At the east end of the hall
a section of early C16 linenfold panelling with 3 carved portraits, discovered
during the restoration work. The portion of the front range to the north of
the hall is C14 with much later rebuilding; its exact relationship with the
open hall is unclear. The C14 work was jettied to the east and north: some
original framing is exposed at first floor level, notably at the north gable
end where there is intact multiple arched bracing. On the east side the
original outside wall is now within a C15-C16 lean-to addition. The south end
of the front range is of red brick (plastered over externally): there is work
of c.1600 but the structure and floor joists appear to be C15 or early C16.
The roof over all the front range is of c.1600. Late C18 work includes a good
panelled room on ground floor with original paintwork. Country Life 7.12.82;
Guide to Wingfield College, 1985.