A Grade I Listed Building in Stoneleigh, Warwickshire 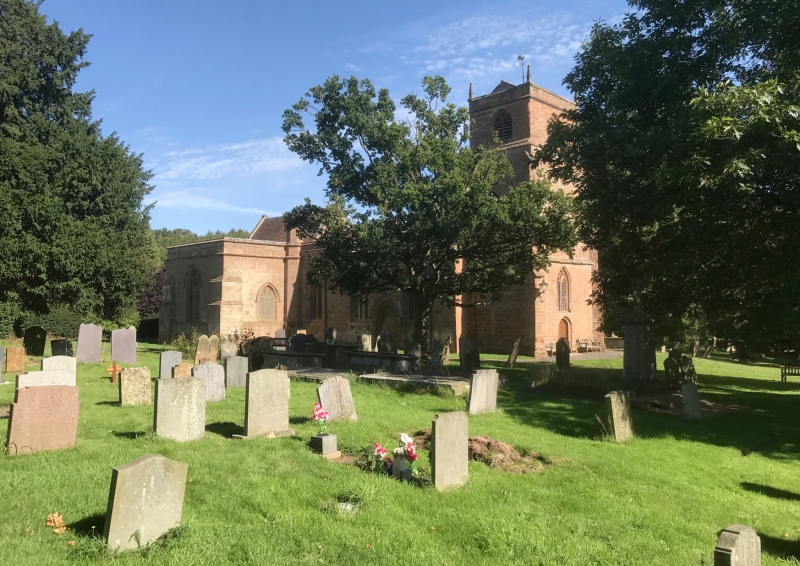 Parish Church. Circa late Cl2 chancel, nave and west tower; partly rebuilt in
mid Cl4 when south aisle added; vestry added 1665; north chapel early C19 (by
C S Smith of Warwick). Built of red sandstone ashlar except south aisle which
is in a lighter coloured sandstone ashlar. The bases of chancel walls for
height of 10 ft are of late C12 date. Above this height it is of mid C14 date,
and reduced in thickness by splayed offsets. In east gable is a window of 3
trefoil lights and tracery, with pointed arch and label with head stops. In the
apex is a small blocked quatrefoil light enclosed in a circle. In south wall is
a 2-light window of two splayed orders with a flat head. Veatry built in 1665
by Lord Leigh as burial vault for his family and a vestry. Splayed plinth,
moulded string course, very high parapet wall with pinnacles. In east wall is a
combined door and tracery window with a four-centred arch and hood mould. On
south side is a traceried window of three trefoil lights with a pointed arch and
hood mould. North chapel built early in C19 as a mausoleum for the Leigh
family, but now in use as a chapel. harmonises with the chancel. It is lighted
on north by a three-light tracery window, and on east and west by a single
tracery window of three ogee lights. Modern oak door on east side. North wall
of nave almost entirely rebuilt in mid C14. There are two clerestory windows,
each of two-trefoil lights with square heads. Below are three tracery windows
equally spaced, the one on east is of mid C14 date, but the other two are late
copies of it. They each have three-trefoil lights with moulded jambs and
mullions, pointed arches and hood moulds. Between the later two windows is a
blocked late C12 doorway projecting eight inches in front of the wall face.
South walls of south aisle entirely rebuilt in C19. At the same time south
porch destroyed and its position perpetuated by a dummy doorway into which an
inscribed tablet from the porch built. Inscription to the memory of Humphrey How,
porter to Lord Leigh, who died 6th Feb 1688. South aisle lighted on south by
two 3-light and one 2-light tracery windows with trefoil lights. West wall has
original mid C14 three-light trefoil window. West tower rises in four stages,
upper storey being added in mid C14. Except for west wall which was
entirely rebuilt, most of third are of late C12 date. The top stage is set
back by splayed offset and has in each face a two-light trefoil window with
four-centred arch. Plain parapet to tower with crocketted pinnacles at angles.
West doorway is early C19 insertion, four-centred head with deep hollow splay.
Above is a four-centred two-light trefoil tracery window. Interior: chancel has
late C12 wall arcading on east and south walls. In south wall of chancel an
elaborate recess in late C14 Gothic style constructed in 1850 for alabaster
table tomb to Chandos, Baron Leigh. In north-east corner of chancel a large
elaborate memorial in black and white marble to Alice, Duchess Dudley and her
daughter, erected in 1668. Has two recumbent female figures under a canopy
supported on eight Ionic columns and on either side an angel with trumpet
holding back curtains. Chancel arch is of late C12 date, and consists of
semi-circular arch of three orders. Tower arch obscured by early C19 gallery;
below the gallery are half round responds and detached shafts with fluted
capitals, contemporary with chancel arch. South arcade of nave has three bays
with pointed arches of two splayed orders on octagonal pillars with moulded
capitals and bases of mid C14 date. Oak panelled bow pews and pulpit of early
C19 date. Font at east end of south aisle is of C12 date, circular, two arcaded
niches containing figures of Apostles.